NEWER UPDATE: Disregard that stuff below; as of August 2015, it's back!

UPDATE: While Lesley Gore obviously rocks, the corporate wet blankets known as Canal Plus, Warner Chappell, and UMG totally DON'T rock! When they're being busy-bodies and wrecking everyone's fun in the name of copyright protection, those short-sighted assholes don't comprehend that this video would have likely produced a spike in iTunes sales of this otherwise somewhat moldy relic from four decades ago! But why would they want profits, when they can have pretend litigious benefits? Dummies!
Posted by CT Bob at 10/26/2012 10:05:00 PM No comments:

McMahon parks the bus on Romney

Apparently Linda McMahon has a severe case of "Romnesia", because she just released a TV ad that basically threw her party's presidential candidate under her campaign bus. Watch this:

McMahon is basically saying that she knows her candidate can't win, so she's willing to drop him like a hot potato and court Obama voters.

I am fairly sure that not only will she fail to gather very many Democratic voters, but she's likely to piss off a significant number of Republican and conservative-leaning Independent voters.

Sad but not unexpected news about the passing of George McGovern today. Among many other notable accomplishments (McGovern was a longtime activist on the issue of world hunger, and in 2001 the United Nations made him its first global ambassador to ease hunger) he was the Democratic nominee for President in 1972.

We all know how that went down, but McGovern was a class act to the end. I think Hunter S. Thompson's words best described what an opportunity this country missed by not electing him president, written in advance of the election in September of 1972:


If the current polls are reliable... Nixon will be re-elected by a huge majority of Americans who feel he is not only more honest and more trustworthy than George McGovern, but also more likely to end the war in Vietnam. The polls also indicate that Nixon will get a comfortable majority of the Youth Vote. And that he might carry all fifty states...

This may be the year when we finally come face to face with ourselves; finally just lay back and say it — that we are really just a nation of 220 million used car salesmen with all the money we need to buy guns, and no qualms at all about killing anybody else in the world who tries to make us uncomfortable.

The tragedy of all this is that George McGovern, for all his mistakes... understands what a fantastic monument to all the best instincts of the human race this country might have been, if we could have kept it out of the hands of greedy little hustlers like Richard Nixon. McGovern made some stupid mistakes, but in context they seem almost frivolous compared to the things Richard Nixon does every day of his life, on purpose... Jesus! Where will it end? How low do you have to stoop in this country to be President?

The New York Times today released their endorsement for senate in Connecticut, and it's Chris Murphy.

Despite Republican candidate and wrestling billionaire Linda McMahon carpet bombing the state with an endless stream of negative TV and radio ads, the Times points out that as CT-05 congressman, Murphy is a fine representative of the people.


Mr. Murphy, a thoughtful and productive public servant, spent nearly six solid years in Congress, with an almost perfect voting record. He was a strong voice for ending the war in Iraq and worked diligently on the committee that helped draft the health care reforms. He also helps run a bipartisan group in the House, the Center Aisle Caucus, that tries to find common ground between the two parties.

Meanwhile, Linda's record of public service is summed up in the 21-second clip: Here's an email I received today from the Jim Himes campaign, which gives voters in Connecticut's 4th District some very good reasons to reelect Himes:

In case you missed it, in an editorial in today’s Connecticut Post, columnist Hugh Bailey explains that Jim Himes will win on November 6 because he has “proven to be a good congressman” and his opponent Steve Obsitnik has been “reduced to running on platitudes.” Bailey also says that while “Himes, to his credit, has taken some tough votes over the years,” Obsitnik has been unwilling to take a position on the federal budget proposals offered by Mitt Romney, President Obama, and, most importantly, House GOP Budget Chair Paul Ryan, whose plan would decimate Medicare and force seniors to pay an extra $6,400 per year for their health care.

“You can’t get elected to Congress on a platform of ‘I’m not that guy,’ particularly when you’re running against someone like Jim Himes, a Congressman the voters respect and whose positions and actions—especially on job creation and deficit reduction—really mirror the positions of the people he represents,” said Himes for Congress Campaign Manager Justin Myers. “Bailey hits the nail on the head when he points out that Obsitnik won’t reject Paul Ryan’s plan to decimate Medicare and that he is ‘running on platitudes.’ With the debates starting this week, it will be interesting to see if Obsitnik manages to form any positions.”

There's also the fact that he [Himes] has proven to be a good congressman, who takes his job seriously and boasts a highly entertaining Twitter feed, too. And he has an opponent in Steve Obsitnik who, like other Republicans in Connecticut, has no interest in tying himself to his national party's extremism and is instead reduced to running on platitudes.

In a recent rundown of the candidates' stands on various issues, the Obsitnik campaign didn't want to say whether he favored Mitt Romney's budget proposal, or the Paul Ryan Medicare overhaul plan, or even the 2013 Obama budget. The answer for each came back as "Question too general." Try that one as a freshman congressman: "I can't offer a yes or no vote because the question is too general. Instead, I have my own special plan." It doesn't work that way.

Himes, to his credit, has taken some tough votes over the years. His focus on the deficit is not in line with the majority in his party (or certain Connecticut Post columnists). But he earns points for taking a stand.

The Fourth District, then, looks to be tough for Republicans.

In the four debates scheduled between Jim and his opponent voters will get to know more about Jim, and probably learn nothing more about his opponent who refuses to take positions or answer questions.
Posted by CT Bob at 10/08/2012 10:59:00 AM 2 comments: 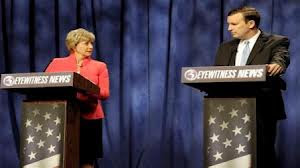 Meanwhile, Chris Murphy is a seasoned legislator who's been fighting for Connecticut citizens for many years. And a heck of a nice guy, too.
Posted by CT Bob at 10/07/2012 10:21:00 PM No comments:

Look, it doesn't matter what I say here, just listen to Linda "Sunset" McMahon's own words: