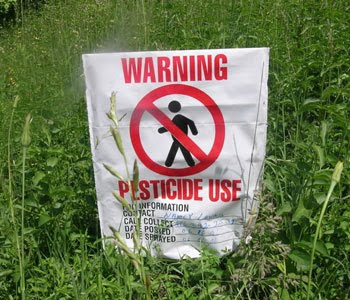 I just don't understand this.

Apparently Milford Representative Richard Roy (D-119th) took it upon himself to cut a deal with the pesticide lobby that may prevent the legislature from enacting any new laws to limit or regulate pesticide use during this legislative session.

Much to the surprise of fellow legislators.

Jane Bradley at CT News Junkie has a detailed write up:

In return for a pledge from the pesticide lobby not to roll back existing pesticide laws, Roy single-handedly promised that the Environment Committee would not raise any new pesticide bills this year.

“I was not a party to any agreement to stop any pesticide legislation in 2011,” said Meyer. “I have expressed concern that he did this unilaterally.”

Now, maybe I don't get the intricacies of the process up in Hartford, but wouldn't it at least be polite to notify the co-chair of the Environment Committee before you cut a deal like that?

Especially considering that this year, for the first time in decades we have a governor who won't automatically veto a bill that even has a whiff of industry regulation, despite the fact that it may directly affect the health of our state's children.

Yet, for whatever reason Dick Roy felt it necessary to quickly curtail any talk of additional protective regulation of the pesticide industry. Roy's thinking that the pesticide lobby would have even a snowflake's chance in hell of rolling back current regulations falls flat given the new governor.

And Roy didn't even call for public hearings before making his unilateral decision:

“I think Representative Roy made a deal with the pesticide interests because he thought he was protecting the pesticide ban,” said Dr. Jerry Silbert, executive director of the Watershed Partnership. “We’re concerned that he didn’t let the people who would like to be his allies know that he was making the deal.”

Mr. Roy, I ask you, is it too late for you to accept responsibility for your mistake and take back your "deal" with the pesticide lobby? Would you consider that we, as voters and party supporters (as well as citizens of this state) might want to at least have the opportunity to speak up regarding the current state of affairs before putting off the conversation for another year?

I heard Monsanto's got a very nice fleet of private jets ready to entertain guests...or something like that...

Over on Cape Cod, the power company wants to spray defoliants all along their high-tension backbone, from Bourne all the way to P-town, although the residents are outraged and there are always tree service guys going door-to-door looking for jobs. And those wires tower over the stunted vegetation there already.

Have you had your Roundup sprayed lettuce salad today?
jcsr

Hey do not attack my boy Roy, this man is my hero anyone who wants mandatory labeling of GMO's in our food supply is awesome. He and I have reached a consensus on this important issue much to the chagrin of our Communist Rep. Rosa Delauro who shuns the idea based on the logic it will impair her husbands client Monsanto. Her Food Murder and Toxification act dies with GMO labeling and Roy thank God Knows this Give credit where credit is due he is killing the Nuricide mandates under Codex Alimentarius.

I dont think De Lauro is A communist,but she sure tried to wipe out small farmers,with a pro Monsanto Bill she introduced for food saftey, and yes her man is linked to Monsanto.
The labeling of GMO food, bill 1115 itroduced by Roy needs massive public support, the COLD HARD FACT THAT MONSANTO CONTROLLED FDA HAS AN ORDER WRITTEN BY MONSANTO'S MIKE TAYLOR WHO HEADS UP THE FDA.....To not test GMO food for toxicity....while NON GMO FOOD may be tested....that crap in being shoived down out throats WITHOUT WARNING....we need labeling for our RIGHT TO CHOOSE what we eat....