TODAY IS THE BIG DAY! 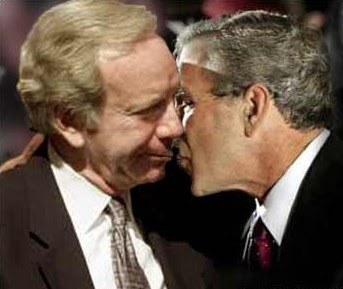 Well, that sure took long enough!

I'm so freakin' happy to see Chris Murphy step up to take over the seat. Now I feel that we'll have an elected official who will honestly serve the citizens of our state, and who will make decisions about national policy that doesn't reflect the will of powerful lobbyists and foreign governments. 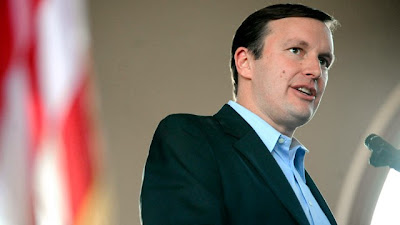 Were things just a little different back in 2006, today we'd be celebrating the start of Ned Lamont's second term as our senior senator. Lamont accomplished something that was thought impossible back then; beating a long time incumbent in his own party's primary and driving him from the Democratic party.

Of course, history conspired with state Republicans to keep Lieberman on for a fourth term. The GOP turned out in droves to vote for a man they saw as a true ally and friend of their causes. How else do you explain that Republican candidate Al Schlesinger only received 10% of the popular vote, when just six years earlier a future convicted child molester got about a third of the popular vote?

I actually voted for Giordano in 2000, only because I was so fucking pissed at Lieberman for selfishly running for VP and Senate simultaneously. Which, if Gore had won and all things remained equal, would have given the Republicans control of the 50-50 Senate because Gov. Roland had the authority to appoint a Republican to Lieberman's vacant seat. Lieberman was hedging his bet, and that's part of the reason he flipped so quickly on the contested 2000 election. He was holding onto national office while positioning for a 2004 bid himself.

My errant vote at the time was because I didn't know that you could choose to simply not vote for one or more offices when you pull the levers (remember those?). So in protest, though I voted for Gore-Lieberman for President and VP, I also dumbly cast a Republican vote for a guy who currently is serving hard prison time for child rape.

I'm not especially proud of that fact.

Lieberman's legacy will include supporting some important legislation, especially earlier in his career. But something happened to him that caused him to become one of the biggest war hawks in the Senate.

Not to mention that he was also a chicken hawk, due to his excessive use of draft deferments to avoid serving in Vietnam. Lieberman didn't want to get his boots muddy in the jungles of Southeast Asia, but boy he certainly had no problem sending tens of thousands of American soldiers to fight and die in a war that was largely caused by Bush/Cheney's lies, which Lieberman enthusiastically supported.

In the 2004 presidential primaries, who doesn't remember Lieberman's classic loser speech, where he triumphantly claimed that he strode to a big finish "in a three-way tie for third place!" He then dove headfirst down the polls and soon dropped out. 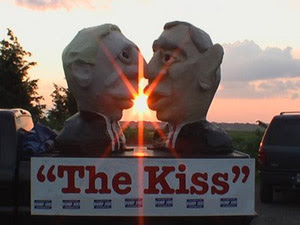 Then, of course, came the famous "kiss" at Bush's 2005 State of the Union address. That kiss came to represent everything he stands for. He followed that up with a kiss to Rep. Chris Shays during the 2008 McCain appearance at Sacred Heart University. Lieberman was the most active supporter of John McCain in the senate, and I'm sure it devastated him when McCain chose that cretin from Alaska to be his running mate instead of faithful ol' Joe. Boy, it made me happy when I heard that announcement!

So now we come to the end of the political line for Joe Lieberman. I'm only slightly curious about where he'll land after this. I assume he'll do some kind of lobbying. But I can't really invest any effort into researching it, because I honestly don't care what he does, as long as he no longer stains the senate with his presence.

Yes, we'll no longer have Joe Lieberman to kick around any more.

Thinking back on 2006, I really want to thank all the bloggers and people I've worked with. The nature of blogging has changed considerably since then, with the advent of social networking, which was unheard of in the day. I was very lucky to hang out with a bunch of smart, funny, and immensely talented people. It was an amazing and hugely rewarding time for me.

And here's a final "thank you" to Ned Lamont, who courageously opened a national conversation that needed to be addressed. And with it, he helped change the face of the political landscape that continues to this day.

Happy LieberLeaving Day! Hard to believe it was almost seven years ago that Ned decided to run. He really does deserve our respect and admiration. His campaign, I believe, was instrumental in achieving the change in the national political landscape we saw in 2006.

Your sunset kiss photo is a classic. Reminds me of the good old days of painting Lamont contribution boats, regular MLN visits from Sara, Greenpeas, and Scarce, CtBob being awarded a thumbs up from Jesus's General, Spazeboy becoming Spazeman, and the amusing array of LiberTrolls and LieberGoons unleashed by Joe during the primary campaign.

Speaking of LieberTrolls, I saw Richard Goodstein on MSNBC last week, talking about the so-called "fiscal cliff". He was the dickhead who led the LieberGoons to break up a Lamont campaign appearance at Ted's. I was so happy when I put up that video where he embarrassed himself by screaming at a reporter. God, what a douche!

The campaign staff and volunteers on the Lamont campaigns, primary and general, should also be mentioned. So many people worked their hearts out in hopes of ending the Iraq War and proving that Connecticut could speak out against an entrenched politician.

We lost some, we gained some, and every day I thank everyone who helped. Especially Ned.

(PS yesterday I was thinking about DaveFromQueens coming here to mock Lieberman at the Republican fundraiser in Milford.)

I totally agree! I've yet to see people work as hard on ANY campaign as I did when Ned ran in '06. There were many unsung heroes during that amazing year!

And yeah, good ol' DaveFromQueens! So sad he's gone, but he left a lot of great memories of him wearing his Bush mask!