Serial killer on the loose

I'm so tired of idiot conservatives going around saying COVID-19 is "basically the same as the flu"!

Today is April 20th. So far in Connecticut we've had 1,331 COVID-related deaths. It's up over 200 from the previous day.

For comparison, during the 2017-18 flu season, which was a particularly bad one, there were a total of merely 184 flu-related deaths here in Connecticut. We had more than that YESTERDAY alone!

And this pandemic is FAR from over! It's nothing like the flu.

Here in Milford, we've had 31 deaths, up 5 from yesterday. Just think about that. Five people who were alive in my little city yesterday are now gone.

Yet, today in many places around the country, conservatives held public rallies AGAINST the measures that are designed to keep people safe and alive.

Why are people so fucking stupid? Can they not comprehend that by suddenly pretending the pandemic is over will actually cause it to last MUCH LONGER? Instead of gradually easing restrictions as testing data shows a marked decrease in new cases, they want to throw open the floodgates and let life return to "normal" right away.

As if "normal" is something that we'll just magically get back to.

So, we'll probably have a minimum of six more months of necessary isolation before we can even think about restarting the economy. Which probably would have been half that if people would just LISTEN TO THE DOCTORS INSTEAD OF WACKY POLITICIANS!!!

Imagine if we reacted to these deaths as if they were caused by a serial killer instead of a virus. People would hide in their homes and take every available precaution to ensure their health and safety until the danger passed.

But our complete and total lack of leadership on the Federal level has guaranteed that this pandemic will last much longer and kill many more people than it should have, had it been handled properly from the start.

Actually, we DO have a serial killer on the loose. 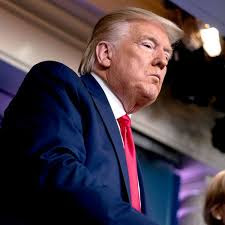 His name is Donald J. Trump.