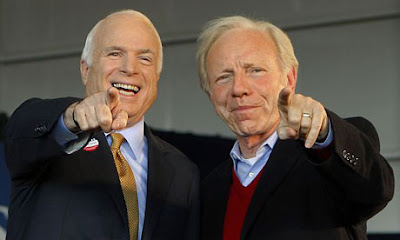 CORRECTION: OK, I guess I fucked up. I saw an article online that had Joe Lieberman and Jim Webb voting against cloture, but I just found out I was wrong. While my distaste for Lieberman remains as solid as the granite upon which the faces of Mount Rushmore were carved, I did indeed get this one wrong. And for that, I apologize most sincerely.

This apology technically ain't flowers I'm sending him; but then again, I never got flowers from Joe for all his broken promises to me.

The following is my amended article, which still accurately reflects my anger at the Senate that is being held hostage by a Republican minority:

The vote ended up being 50-49 in favor of the bill, but in our ridiculous Senate democracy you can't get a single fucking thing done without 60 votes.

I'd seriously consider supporting a "nuclear option" in the Senate (or as our Republican brothers are fond of saying, "noo-cu-lar") but I'm concerned that the Democrats' lack of leadership (thank you Mr. Reid) will result in the GOP winning a Senate majority in 2012, and the elimination of the filibuster will pretty much allow them to turn our nation into a repressive police/religious state that will rival Iran in its severity.

Congratulations to the wealthiest 1% of our nation. You once again avoided having your taxes raised to even a fraction of the rate that was in place before the George W. Bush tax cuts. You know, that period in the 1990s when our economy was incredibly strong and vital and we had near-record employment.

Excellent, wish we could have him another term.

He is a very good Republican, I'll give him that.

Right, 98% voting democrat, he has higher ratings than some "real Dem's". heheh.

Bob,
Send JoeLie some flowers. He voted Yea on this procedural vote. The only Democrats to defect were Tester of Montana and B Nelson of Nebraska went over to the R side.

Fuck! I read the wrong article, I guess. Thanks for pointing this out Oldswede. I corrected my article and had myself a heapin' helpin' of crow in the process. The beaks and claws were really tough to swallow.

Political blogging sucks when you're wrong. It happens. It doesn't help when I get off a good rant against someone like Joe and then negate it by being a skim-reading ass. FUCK!

Oh, and JTHM, you're not a very good Republican if you want a guy who votes 98% of the time with the Dems to get another term. Wait'll I tell your teabagger friends!

I don't much care how JoeLie voted because he will never redeem himself but I would love to know what Harry Reid did to get JoeLie in line. Must have been a truly fearsome threat.
oldswede