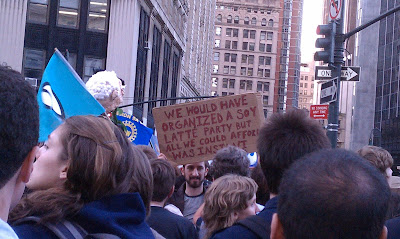 Today was the first organized "Occupy Hartford" protest in Bushnell Park, a local spin-off of the "Occupy Wall Street" phenomenon.

Finally, the movement is making enough noise that even the corporate-owned media can no longer ignore it.

"More and more people are joining the Wall Street occupation," an article in the Occupied Wall Street Journal, the new house organ of the nascent protest movement, reports. "They can tell you about their homes being foreclosed, months of grinding unemployment, or minimum-wage dead-end jobs, staggering student debt loans, or trying to live without decent healthcare." 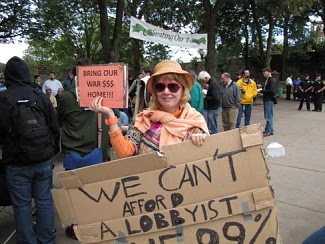 Around 65 people gathered on a sidewalk outside Bushnell Park Wednesday morning and identified economic injustice as the primary unifying principal of the Occupy Hartford movement.

The activity in Hartford represents the latest incarnation of a movement that began last month in Manhattan with the ongoing “Occupy Wall Street” demonstrations. Since then demonstrations have sprouted up in dozens of cities across the country. University of Connecticut students were expected to stage a walkout Wednesday afternoon to show solidarity for the movement.

The beautiful thing about this movement is how perfectly it contrasts to the obviously corporate-sponsored Tea Party events, like the Freedom Works-sponsored Tea Party rally (link to my awesome video) in Bridgeport two years ago on the 8th anniversary of the September 11th terrorist attacks. This well-financed event included a stage, professional sound system, bus rental, security (oh boy!), and whatever it cost them to get Ann Coulter to appear in Bridgeport.

Watch the video and see how well it turned out.

The "Occupy Wall Street" movement more accurately reflects the will of the regular PEOPLE of our nation, rather than those easily-duped FoxNews automatons that have made a habit out of mindlessly parroting the views of the privileged who control nearly all of mass media.

As a matter of fact, just today I was arguing with a conservative relative about politics (gently, because after all he is my blood) and he was totally ignorant of the fact that President Obama had not long ago signed a two-year extension of the awful Bush tax cuts. Because, when you get all your news funneled through one source, they quickly learn to tell you only information that benefits them! There's no upside to FoxNews admitting that a Democrat would do anything they consider good. Attack the Dems at any cost is their motto.

Not that the Democrats are anywhere NEAR blameless for the current economic meltdown we're facing. Years of being beholden to Wall St. and corporate banking interests (who, after all, are among their biggest contributors) has led to the unhealthy situation of legislators who wish to win re-election being obligated to pass laws that favor those very interests.

Finally, people are starting to realize that it doesn't matter if the guy has a "D" or an "R" after his name. It's the "$$$" that matters.

THIS is what the movement is all about. This isn't about partisan politics. This has nothing to do with political parties.

This is about letting the people we elect to represent us KNOW that we're fed up with the way they let their corporate masters write our laws.

And as grassroots movements go, this one is definitely growing some roots.

It's just people, after all.

Nice, kids who made the wrong choices in life to adavance the station in life complaining about something they know nothing about.

First they mock you...

Cut the shit, these sniveling little drones are just seeking their own misguided socialist nirvana. They must have missed the day in school when they taught how Totalitarianism causes more death and dispair than any other political movement known to man.
The Dodd/Frank + Durban banking reform law is already driving up costs..which it was supposed to stop. When are people going to learn, whenever self serving Politicians start something they end up hurting we the people.
So they protest the 1% and want the Government to have all the control, yeh thats a country I want to live in.
$20 minimum wage? Free College? A living wage regardless of employment status. Sorry but they are not grounded in reality unless of course your reality lives in a career Professors head.

PS, I chuckled when I read your troll say "cut the shit." Not only am I a snivelling big drone, I'm a Twoffer too! So, troll, when you return and read this comment, I suggest you click on my name. There's some mental health professionals there that have some advice for you..

Copy and paste the link into your browser it works.

That said, if you yell "I'm a fucking journalist, you motherfucker!" at the cops, it's obvious you've already lost your journalistic credibility.

It is a curious fact, but a fact nonetheless:

A "$20 minimum wage" would provide slightly LESS BUYING POWER than the $1.87 minimum wage in 1967 did. That was 35 years into the New Deal Government (which really started in 1927, under Coolidge.)

We've clearly screwed up (and some things have been beyond our control). But the ReThugs seem to think: "Yeah, we screwed up, so it's now 'every man for himeself' time." I think the patriotic, the traditional AMERICAN thought should be: "Yeah we screwed up, but how do we fix it?"

I could go on and on about this...but I choose not to argue with fools or knaves.

I get all my news funneled through Connecticut Bob.

A narrow funnel equals a narrow brain...big surprise there aye? Silly little Marxists, I pray it comes to pass fore you all will be the first to suffer the consquences of a Authoritarian rule.
I must say though, funny how Astro-turfing Unions and Soros backed facilitators get off without mention...what posers you are.
These punks and punkettes don't want jobs, they want hand outs, just like Greece and England etc.
It is cool watching the NYPD give a major beat down on the little drones on Youtube, it's better than the ALDS! LOL

FYI, the link you told "Anynom" in fact doesn't work.

You're using an article featuring anonymous emails as proof that WE'RE the bad guys, and YOU'RE using an ANONYMOUS account to say that?

Wow, you really are a dummy!

There is common cause with the Tea Party - the populist revolt is on! :)

Sure those threats didn't come from a NRA card carrying Tea Party member?

I too believe the true Tea Party folks and the OWS protesters have much in common. They're both pretty much sick of all the corporatist bullshit that the two party system supports.

The Tea Party was pretty much hijacked. At one time they were talking of forming their own political party. How great would a true 3rd party be? But then... The TP was absorbed rapidly and quite brilliantly into the GOP so not to divide the conservative electorate.

Yes! This is what nearly all of the media is missing!

The original intent of the Tea Party was to protest pretty much the same things that OWS is currently protesting.

But the GOP quickly took it over and turned it into an anti-Obama crusade rather than a citizen's rebellion against govt. and Wall St. collusion.

It became a FoxNews/FreedomWorks sponsored road show, where the voices of the people were drowned out by the caterwauling of highly paid shills like Ann Coulter over a 10,000 watt PA system.

The OWS thing is entirely homegrown, and I can only hope that it isn't similarly hijacked by either party or the corporate media.