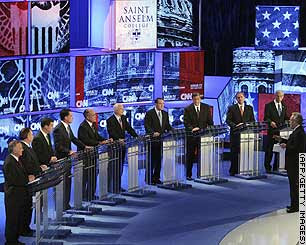 The race to decide who will be the Republican challenger to Barack Obama begins immediately after the holiday season. Already candidates are spending plenty of time in places like Iowa.

The Democratic Primaries are still on some calendars, but I'm not going to bother to list them here. President Obama will definitely be nominated again at the convention so there's no point in wasting time dealing with the primaries.

The real contest is going to be watching how the Republicans try to out-crazy each other. My prediction is that the nominee is eventually going to be Mitt Romney. He will appeal to the less-nutty faction of the party, which I think actually represents the majority.
Posted by CT Bob at 11/20/2011 07:45:00 AM