This may the the worst thing ever 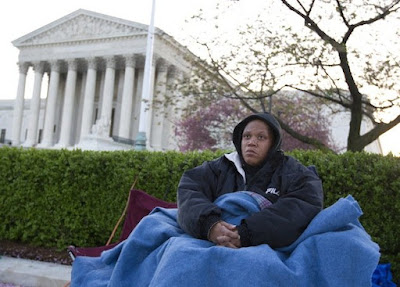 If there was ever an example of how awful the disparity between the 1% and the other 99% is, just read this article, via Chris Moody | The Ticket:

WASHINGTON -- Temperatures are expected to dip below freezing overnight Monday, and Charles Medley will spend the whole time outdoors near the base of the steps of the U.S. Supreme Court. Why? He's hoping to hold a coveted place near the front of a line for access to the oral arguments over the federal health care law.

But when the second day of arguments begins Tuesday morning, Medley won't actually be going inside. He's one of about 25 people camping out Monday--some paid just $5 an hour--in order to hold a place for somebody else interested in watching the health care hearings. Tickets for Supreme Court cases are granted on a first-come-first-serve basis, and because of the enormous popularity of this case, anyone without a special pass or media credential is required to wait for several hours or pay someone to do it for them.

Prices for D.C. line-standers vary widely. Some say they make as much as $15 an hour, while others bring in a third of that. Most don't want to reveal who they're working for, or simply say they don't know to avoid divulging any details. The majority of the people getting paid to hold a spot are unemployed; some are homeless. However, there are actual businesses in the D.C. area that specialize in this, charging as much as $50 per hour to save your place.

Medley, an out-of-work subcontractor who said he found out about the opportunity through a friend, arrived in front of the Supreme Court building at about 2:30 Sunday afternoon. He spent Sunday night outside shielding himself from a light rain, and will sleep on the street here until Wednesday morning, the final day of the hearings. He gets an hour and a half break for lunch each day--people rotate in and out to save spots--and he treks a half a mile to Union Station to use the restroom.

"They're paying for us to stay here for three days," he said, surrounded by new friends perched on lawn chairs who were also holding spots for other people. "It's got to be something real important."

Medley joined a row of men sitting along the sidewalk, joking together. One man, wrapped in blankets, snored loudly. Some listened to music, one read a book by the Rev. T.D. Jakes while others just sat alone quietly.

A cold front is predicted Tuesday that could bring temperatures in the 20s, so everyone has stocked up on blankets, sleeping bags and heavy jackets.

"You better make yourself comfortable if you plan on sitting out here for 72 hours," Medley said, motioning toward a man stretched out on a cot. "It's pretty nice during the day, not bad at night either. You just have to dress for the occasion. You never know when mother nature might hit us with a whammy. But we keep each others' spirits high."

At the front of the line, Chris Woods and Sonya Smith sat together holding a space for a person they declined to name. They arrived late Sunday night and plan to rotate shifts with others. Woods, a 19-year-old wearing a baseball cap, said he intends to stay on for about 15 hours before taking some time to sleep and then would come back.

"It was pretty cold last night," Woods said, but added that he didn't mind it.

At about 3 a.m. the night before, the sprinklers went off, waking up most of the people sleeping and spraying everyone with their head near the bushes. Tonight, many said, they'll sleep the other way around.

This literally makes me want to puke. It's like that scene in that movie "The 300", where slaves actually lay down and let their ruler walk over them as human steps!

Maybe they can set up a lottery, so those of us not wealthy enough to pay someone to sit in the cold (or desperate enough to actually DO it) can still have a shot at seeing the proceedings.

Or, how about they just drop the fucking rules about letting some poor sap wait in line for you and making those lazy rich fuckers have to freeze their own asses off for few days to get a place in the hallowed halls of justice? You step out of line, you lose your place! You don't like it, tough shit! The rich just have it too goddamn easy in this country!

At the very least, maybe some intrepid soul can agree to wait in line for three days for some obscenely wealthy fuckwad, and then when the fat cat comes to claim his spot minutes before the doors open, the line holder suddenly tells him loudly to go (perform random unnatural act upon) his (insert random family member), and then walks inside the Supreme Court building to actually watch (and hopefully blog about) the action.

Hmmmm, I know some "troublemakers" down there. Thanks for the tip and I will be sure to let tehm know.

Click on my name to go meet Luke Rudkowski. In the nearly decade that I've known him, he just gets better and better.

I am a big fan of your righteous indignation.

But why do you want to stop this well-devised trickle down to the poor?/snark

PS ref. "Don't piss on my back and tell me it's raining" or, in this case, don't turn on the sprinklers while I am being paid to sleep on the pavement.

Heh heh. Trickle down indeed! The massive sense of entitlement that extreme wealth brings people gets on my nerves a bit.

And I just love the idea of telling one of those fat cats to stuff it!