This woman was only interested in her breakfast, not the crowd or media surrounding Republican presidential candidate Carly Fiorina as she campaigned hard at Blake's in Manchester Monday morning in the final hours leading up to the presidential primary. PAT GROSSMITH/UNION LEADER 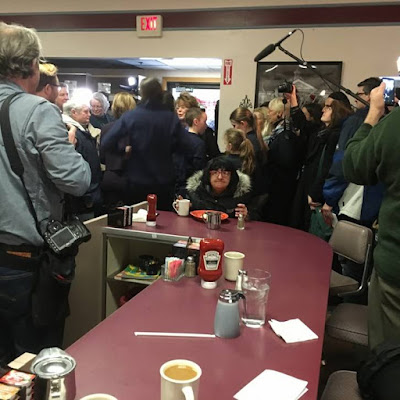 Fiorina's dynamic presence obviously didn't impress this lady, who was probably wondering what all the hubbub was about!

We're only a few hours until the voters in Dixville Notch (2010 population was 12) gather at a minute after midnight to cast their votes. The polls (one poll, actually) close as soon as 100% of the registered voters cast their votes, usually in the first minute or two. And then the results are announced to the media.

The winter storm (can we just call it "snow", like we did when the media didn't whip itself into a frenzy of orgiastic delight every time a few snowflakes fall out of the sky?) will probably have little effect on turnout, since they're pretty much used to crap weather up there. The bigger deterrent may be the unbeatable lead the two candidates are enjoying. Possibly the turnout won't be as high as previous years, which could result in wildly unforeseen results.

Ah, who's kiddin' who? It's gonna be Trump and Sanders by easy double-digit margins, and then the candidates get to battle it out in South Carolina and Nevada. Coming soon.
Posted by CT Bob at 2/08/2016 07:56:00 PM