The Man-baby-elect has begun to restrict access to one of the most revered icons in the history of civil rights on his special day.

And it appears he is being allowed to do just that. 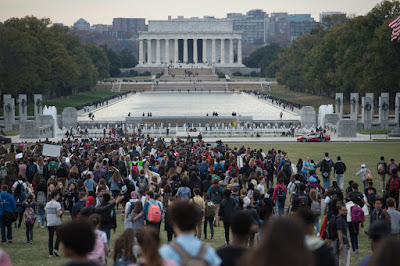 The Lincoln Memorial is being declared off-limits to protests for a period before and after Inauguration Day.


On behalf of the Presidential Inauguration Committee, the National Park Service is denying permits for marches and protests not just on Inauguration Day, but for days before and weeks after. This is unprecedented, and it is just another example of Trump's disdain for the 1st Amendment. The rights to free speech, to peaceably gather, to petition the government for redress of grievances are bedrock, fundamental, essential to what it means to be American since the Revolution. He's starting this shit before Day 1, literally. We must resist. And Trump supporters have an even greater obligation to resist. You claimed to vote for this guy in part because he wanted his speech to be as offensive as he wanted without being restrained by "political correctness". Now he is literally shutting down speech that could be even remotely critical of him, not just on the big baby's special day, but on all public lands in DC before and after. PUBLIC LANDS. Not Trumpland. Ours.

Now, I'm not an expect on how Presidential powers work, but it seems to me that until the very moment the Orange Skittle repeats the Chief Justice's words on January 20th, there is still a President in town who can do something about this ridiculous abuse of the office.

The Women's March on Washington is scheduled for the day AFTER the Inauguration, January 21st. On that day, Trump can do whatever he wants.

I think the organizers should move The March up just ONE day, to begin early in the morning the Inauguration!

While we still have a President who believes in Freedom!

Obama can make the simplest of Executive Orders granting a NPS permit to the expected thousands of women who want to march, and leave it to Trump to have to decide if he's going to send in riot police or National Guardsmen in on Inauguration Day at 12:01pm to forcibly and violently clear the area! Just think how short a Trump presidency will be if he goes full-Tiananman on his VERY FIRST DAY!!!