A guide on how to impeach Trump 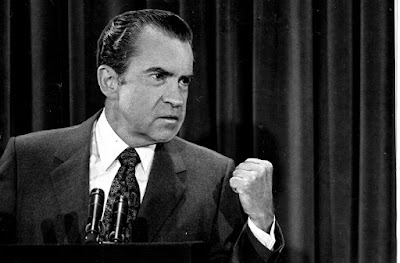 (photo of a president who was never impeached)
This is not necessarily about Trump, but more of an overview of the impeachment process. I just hope that Trump will have to deal with it sometime soon.

When Barack Obama won the popular vote AND the electoral college back in 2008, there were almost immediate calls from righties to "Impeach Obama".

In the last several weeks, there have been many similar populist cries for Trump's impeachment.

I actually wonder if there are many people who understand the process. Even though it happened less than 20 years ago with President Clinton, I feel that our short attention span culture has forgotten much of it.

And today's millennials were either not born yet or too young to understand it.

So, here's a primer on what impeachment actually is.

There's actually a lot of stuff packed into that sentence.

First, we know the President and Vice President can be impeached. Impeachment is the trial, kind of like being tried for a crime. Conviction for both things is punishment, except the punishment for being impeached AND convicted is removal from office, while being convicted of a crime in court usually ends with a prison sentence.

Unless you're Scooter Libby, who revealed the identity of an active deep cover CIA field agent, which is a HUUUUUGE felony. But after his conviction, his boss's boss commuted his sentence, so his punishment consists solely of an inability to vote as a convicted felon. Other than that, he's probably doing well.

And this is weird, what grown adult goes by the fucking name "Scooter"? Like, really?

And what about ol' W not giving his li'l helper a pardon, rather than a commutation of his sentence, which leaves his record forever blemished as a felon? THAT'S what you get for helping a child tyrant. Trump voters apparently ignore history.

What's the definition of "all civil Officers of the United States", you ask? (even if you didn't, I'm going to tell you)

"By this term are included all officers of the United States who hold their appointments under the national government, whether their duties are executive or judicial, in the highest or the lowest departments of the government, with the exception of officers of the army and navy. A senator of the United States, it was once decided, was not a civil officer, within the meaning of this clause in the Constitution."

Yes, it is, like much of our government's framework, a little confusing. The key phrase here is those "who hold their appointments under the national government, whether their duties are executive or judicial..."

So it seems that besides POTUS and VPOTUS, pretty much anyone who hasn't been elected to Congress but is a civil servant is impeachable. That goes for Supreme Court justices too. But since that one senator in 1789 (at the very dawn of our nation), nobody but Presidents, the odd cabinet member, and ill-fated judges have been impeached.

Being that presidents CAN be impeached, and understanding that impeaching a president does not mean he will necessarily be removed, let's talk about the impeachment process.

This is the area that first requires a crime to be committed, and then Congress to act upon it.

Treason and bribery are clearly mentioned in the paragraph. But what of "high crimes and misdemeanors"? That leaves a lot of interpretation there!

In our history, people have been impeached and removed for "crimes" such as "chronic intoxication" (shout out to judge John Pickering, our first impeached guy), tax evasion, conspiracy to solicit a bribe, and making false statements to a grand jury (I'm talking to you, Bill Clinton). 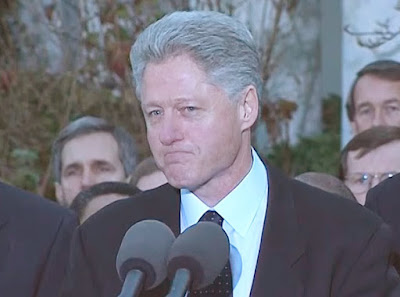 (photo of a president who WAS impeached)
President Andrew Johnson was impeached largely on the charge of a violation of the Tenure of Office Act, passed by Congress the previous year to protect their Secretary of War, who was replaced by Johnson. So technically, a president may be impeached for violating laws passed by Congress. Trump may be in some danger of doing something like that, given his nature.

President Richard Nixon was definitely going to be impeached, but he resigned before the actual proceedings took place.

President Bill Clinton was impeached largely for perjury, due to his verbal gymnastics about whether he did or did not "have sex with that woman".

Bill, let me help you with this. If you're a MARRIED guy, and a woman who's NOT your wife favors you with the kind of act that, while it is SUPER pleasing, can't POSSIBLY produce a baby, you've still DEFINITELY had sex with that woman! Got it dude?

So how does the whole impeachment process get rolling?

First, you need to have actionable proof that a president has committed treason, taken bribes, or indulged in what we've already said is open to interpretation, which is high crimes and misdemeanors.

We're only two weeks into Trump's presidency. I don't know if any of the horrible ghastly things he's done so far qualify for that definition. Which kind of makes it funny that people were calling for Obama's impeachment the minute he got elected! Like, you have to actually be IN office at the time, and THEN commit a crime to be impeached.

The charge would go to the House Judiciary Committee, who would rule on whether it should come up for a vote. It if does, you need a simple majority of the House to vote to move the Article of Impeachment forward to the Senate. Since in Trump's case, they are the majority party in the House AND the Senate (nice work Dems!) they hold the cards. A good indicator on how they feel is if the Articles make it out of the Judiciary Committee, since they hold the chair and the majority. Should it get out of there and go to a full House vote, the odds are better that they'll get the support to move it along.

Then the Articles go to the Senate, where selected House members are the "prosecutors" who will present the case to the Senate. They are picked by the House Speaker, which is why it is so important to have a strong opposition party. Again, elections have consequences.

The Senate will essentially hold a "trial", where the president may call his own witnesses for his defense. After all the arguments are heard, it goes for a vote. The Senate needs a 2/3 votes, or 67 senators, to successfully remove the president.

Which is unlikely even in the worst of times. But impeaching a president can do significant damage, as shown in the Clinton impeachment. He suffered a loss of support, a massive humiliation, and by necessitating a defense, it robs him of time and political capital to try to enact future policies.

So even a failed impeachment can be a victory for the minority party. Of course, the real losers in impeachments and government shutdowns are the little people. The fearful and hateful politicians will continue to live comfortably and largely be insulated from the effects of this process.

But then again, if an impeachment successfully removes a child-monster with his finger on the button that will annihilate the world, well, it might be worth it!

(Disclaimer: I'm just a sort of interested political fan, so if any or all of my facts are wrong, I wouldn't be surprised.)