Because, like how the hell else are you supposed to suspend the Constitution and make slaves of our nation's citizens?

No, I'm just kidding. Nobody thinks that might happen. It would be impossible.

And besides, I really don't want to make Trump's "list" of enemies!

Nixon had a list of enemies. It was awesome! It was conceived by Chuck Colson, one of Nixon's trusted cronies and White House Council, who was informally named "the meanest man in American politics". Chuck supposedly had a sign on the wall of his White House office that read "Once you have them by the balls, their hearts and minds will follow!"

Colson organized the "Hard Hat Riot" in New York City, where hundreds of union workers were tasked with beating peaceful anti-war protestors with lengths of iron rebar! And he gleefully helped the actions of C.R.E.E.P., or the Committee to Re-elect the President. Many of whose members spent time in jail after the downfall of Nixon. Some of the proposals considered by John Mitchell (Nixon's Attorney fucking GENERAL!) were firebombing the Brookings Institute, and breaking into Daniel Ellsworth's psychiatrist's office to possibly find embarrassing info on the man who published the Pentagon Papers.

Google this stuff, kids. You probably have NO idea if you're under 40 just how close we came to losing our form of government.

Yeah, Colson was one of the baddest of the bad. Feared deeply by his political foes, respected by his allies, he was a serious player. And a threat to anyone who crossed him, or the president. 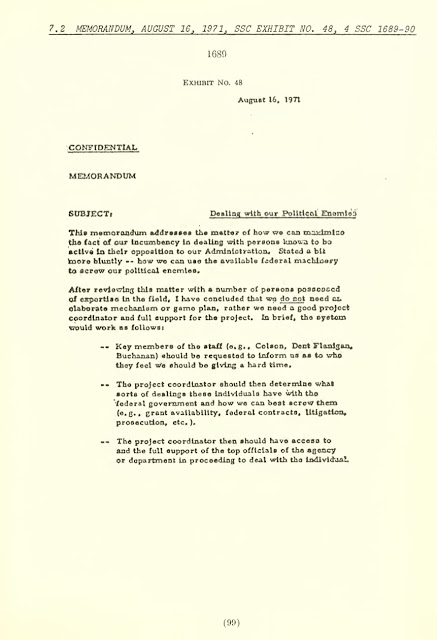 In actuality, there were several lists. The first one publicly addressed was during Watergate testimony by John "I'm not gonna take the fall" Dean, when he told of a list of political foes who needed to be screwed by the IRS back in 1971.

So, some of those names are politicians, some journalists, and some are activists. But PAUL FUCKING NEWMAN? He was such a threat to the most powerful man on Earth that he made Nixon's top 20 list?

I guess Dick was a little thin-skinned about celebs who might say something against his policies.

Hmmm, I think I'm starting to see a similarity here!

The greatest thing about the Enemies List was the fact that Hunter S. Thompson went on a rant the day after the list was released. Saying he openly, in print, often referred Nixon to a "cheap little punk", and went on to say about his being passed over, "I would almost have preferred a vindictive tax audit to that kind of crippling exclusion."

The enemies list expanded after Nixon became more powerful, the list growing to hundreds after Nixon successfully won the 1972 election. Many of the staffers of George McGovern's campaign were added.

But even by then, after the June of 1972 Watergate break-in was being discussed, was leading to Nixon's inevitable downfall.

I'm 100% sure that Donald Trump is counting his enemies on his tiny infant fingers, and having Steve Bannon write them down because he can successfully negotiate the complexity of a "grown-up pen". The list is being added to every single day. I'm sure it will all come out in Trump's eventual trial, as his cheap goons gladly give up the Orange Cheeto in exchange for not having to spend any time in a prison.

But having said that, with Trump promising to increase our already bloated military force, I would prefer to not be on that list.

Just in case history doesn't quite bend toward justice like we hope it does in this case.

Case in point: Instead of his being beaten until he was bleeding out of every orifice in prison like he deserved, Chuck Colson apparently found Jesus and became a evangelical preacher, who was eventually given a medal by President George W. Bush on his work against homosexuals and his love of almighty Jesus.

Because the biggest bastards are almost ALWAYS given rewards.

I wonder how many of those peaceful anti-war kids are still suffering from the effects of being bashed with iron clubs by Colson's thugs?
Posted by CT Bob at 2/21/2017 08:01:00 PM