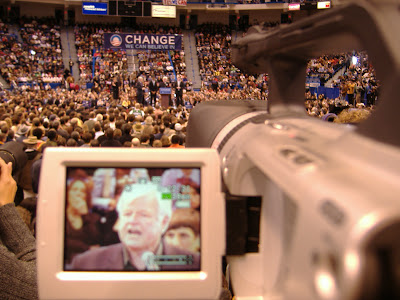 (Feb. 2008: Obama rally in Hartford w/Sen. Kennedy)
Yes, it's never too early to get a head start on silly season in politics! As of today we're only 14 months away (shocking, ain't it?) So here's the projected 2012 Presidential Primary Schedule.

I expect we'll see plenty of changes between now and the first caucus in the 2012 Primary calendar, but even so, I hope to get the chance to be in New Hampshire again for their exciting primary. The cold, the snow, the slush...ah, it's magic! 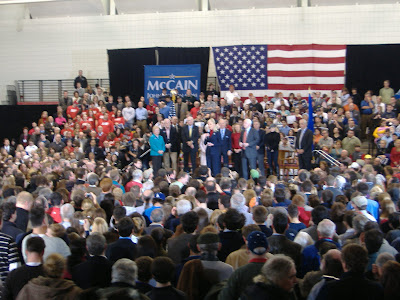 (Feb. 2008: McCain rally in Fairfield)
Here's the current rundown of dates, and I'll update them as changes come in:

This post just reminded me of how much I miss Ted Kennedy. He was the LION of the Senate... and indeed, I liked to envision him as an aged silver lion, reclining in the recesses of his cave, licking his pendulous nuts with a bottle of Chivas under his scraggy paw.

We shall never see another like him... until John Larson hits 60 and starts going to Spring Break.

Primary the President’s ass. I supported him up till a few days ago. The last straw was his offering to compromise on the tax cuts for the 2%. He continues to blame his base instead of Republicans for his difficulties. That’s enough!

The Republicans are going to have a battle royal for their own presidential nomination in 2012. We shouldn’t fear placing a challenge to the president either.

Aw, c'mon Headless, you only wish you had an uncle as cool as Teddy!

Talk about closing the circle...HH bringing up Ted Kennedy, then posts about challenging a disappointing Democratic President.

It's beginning to feel like 1980 all over again...and boy, that turned out great, didn't it?

Ehh... I don't know if I'd want an uncle like him. Without the Kennedy mystique and power he would simply be an embarrassment at Christmas when he pees himself opening gifts and a burden to bail out of the clink every three months.

Without the Kennedy mystique and the power he wouldn't BE Uncle Teddy now, would he? That's like saying Albert Einstein without the smarts would just be a creepy looking old man!