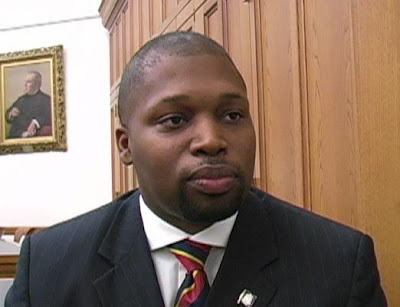 (New Haven Rep. Gary Holder-Winfield/Bob Adams photo)
A bill to abolish the death penalty in Connecticut passed a significant milestone today when it was voted on to proceed out of the Judiciary Committee.

Hugh McQuaid at CT News Junkie has the story:

After less than two hours of debate Tuesday evening, the Judiciary Committee passed a bill that would prospectively abolish the death penalty in the state of Connecticut.

Committee Chairman Sen. Eric Coleman, D-Hartford, said he saw many reasons to abolish the death penalty in addition to fundamental moral objections. The state rarely executes anyone, the penalty tends to disproportionately affect minority groups and poor people, and it’s inconsistently applied depending on what jurisdiction the crime takes place in, he said.

“[Abolishing the death penalty] would put us further aligned with countries throughout the world which we have more in common with than countries we consider aggressive and regressive,” he said.

While I'm opposed to the "kill-happy" policy of other states (like Texas or Florida), I must admit that I'm torn on this issue.

I believe there are (admittedly rare) crimes for which I'd support a death penalty (Charles Manson, Jeffrey Dahmer, Steven Hayes, and Sirhan Sirhan are four examples which spring to mind); and I believe that, if permissible, the death penalty must be administered only after passing the highest of judicial review and after the longest period of time.

That being said, it seems to me that there is a cadre of federal judges who are "kill-happy": who do not apply the requisite judicial review; who place (in such instances) an inordinate weight to, and prejudice for, the prosecution's case. Death penalty reviews are the one instance in which the prosecution must be forced to overcome the needed high bar of proving their case.

Connecticut's death penalty laws, while cumbersome, expensive and time-consuming, nonetheless fulfill both the above concerns, and I believe our state law address both the extreme rights of those so convicted as well as society as a whole.

Problem is, if you have money you almost never get the death penalty. If you're poor, you stand a good chance of being killed for your crime.

Just THAT is reason enough to strike down the law. Punishment shouldn't be meted out depending on the net worth of the criminal. It should be based only on the crime.

This will never change, so we have to repeal the DP law.