That's the rallying cry of Wisconsin Democrats who have gained enough signatures to force a recall election for State Sen. Dan Kapanke. Kapanke supported the anti-union bill that's currently being contested in the Wisonsin courts. 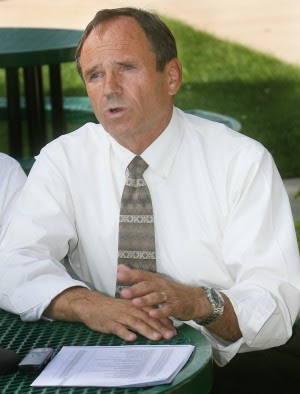 (Dan Kapanke / Tribune file photo)
Wisconsin Democrats have begun recall petitions for 16 Republicans, but as far as I know, they need at least 8 to be recalled in order to break their majority.

From the LaCrosse Tribune:

Recall organizer Pat Scheller said volunteers have gathered more than the 15,588 signatures needed and that they plan to take them to Madison after a noon rally today at La Crosse City Hall.

It is expected to be the first completed of 19 active recall efforts registered between Feb. 24 and March 2 against 16 senators.

Kapanke did not return messages Thursday, but has said the recall is “part of the process.”

Well, that "process" is about to bite you and your fellow GOPers right on the ass. DKos polls indicate that any generic Democrat wins easily over Kapanke.

Looks like there's not going to be any more "hanky Kapanke" in Wisconsin!

(groan...why did I do that? I don't even know if Kapanke rhymes with "hanky")

Democratic Governors Defend Their Own Union-Bashing With Irony and Duplicity: