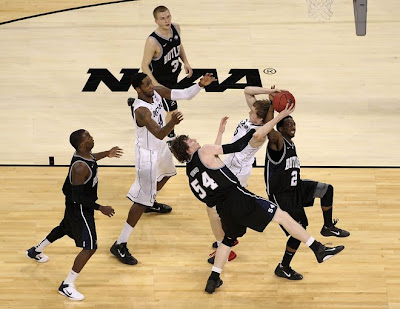 Congrats to the UConn Huskies for winning another national championship, even though the game was so poorly played that it appeared both teams wanted to lose badly.

Butler must have wanted it worse.

At about eight minutes into the game we began ridiculing both teams. Every missed hoop and turnover was cause to creatively insult the team. We eventually had to get a thesaurus to come up with new adjectives to describe the level of sucklitude that was pouring out of my TV screen.

Which, by the way, is an old-style standard definition tube TV. My friend casually complained about it for the first few minutes, but after the game he thanked me for sparing him the visual immediacy of watching a game that bad in high definition!

(Hey it's a Bennifer reference! How often do you see those anymore?)

I guess when you win, you win. But for the announcers to have to go back seven decades to find a championship team that did worse than you is kind of amazing.

The announcers apparently did not notice that 2 of UConn's 3 best players - Lamb and Oriacki - were on the bench for most of the first half with 2 fouls each.


Once they came back onto the floor there was no doubt about the final result.

True. There were a few kids out there that I didn't recognize immediately.

Jim Calhoun is Bombastic, braggart, B----,(whatever else starts with B.).
He is also brilliant.
Walker is the point guard, the playmaker, has been all season. Everyone knows that especially Butler. So Calhoun gives a freshman kid the job. Mind you, a good player and puts Walker over here. No, over there. Hey, he's over here. Meanwhile Butler forgot to do what basketball is all about. PUT THE DAMN BALL IN THE HOLE! jcsr

I loved Calhoun's nod to Ken Krayeske in the post-game press conference, when talking about his half-time speech to the guys:

“If I told you what I told the kids at halftime,” said Calhoun, “I would probably make one of those YouTube things again, when somebody asked me about my salary.”

Calhoun is a guy who knows how to hold a grudge!