Did anyone else notice how today's perfect weather eerily mirrored that beautiful, sunny, crisp pre-autumn day 11 years ago? More than any other anniversary since, today was the most similar to that fateful morning when everything changed.

And this is the first anniversary of that day where we all live in a world that Osama bin Laden doesn't.

I drove by a 9/11 commemoration in Stratford today. First responders, military veterans, families and friends of people who lost their lives that day were in attendance. It made me feel good that we will always remember the victims of that day, and also the untold thousands of stories of individual courage and bravery that occurred during what was the worst attack to ever happen on U.S. soil.

It makes me hopeful for our nation. 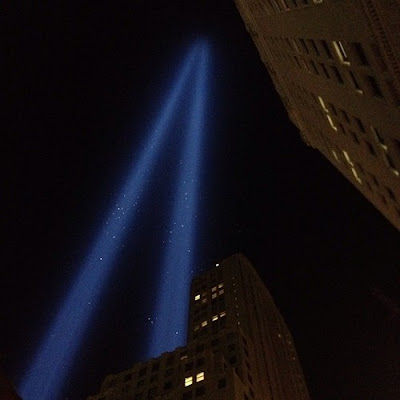 Yes, I certainly noticed the way the weather was the same. Maybe a little more breeze 11 years ago. I was watching on the seawall in Jersey City right across from the WTC complex, and the memory of the people jumping out the windows haunted me all day. We all were waiting for the firemen to get it under control, like they always did. Always.

Now, you already know my take on this, and I'm not going to repeat it here, except to say that the photo you used for your story is wrong. there should be THREE beams of light, and I'm sure you know why too... I'm not going to get into the Osama fable now either.