This is someone who should be our senator?

About that headline...I don't know why I suddenly sound like an old Jewish woman, but it's all I could come up with at a moment's notice.

My favorite groin-kicking candidate Linda McMahon was late on her taxes again. Just this year, as a matter of fact, when it somehow slipped her vapid little mind that she is supposed to pay her goddamned taxes on her condo! 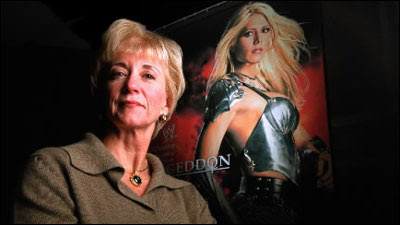 Republican U.S. Senate Candidate Linda McMahon and her husband, WWE chairman Vince McMahon, were more than a month and a half late in paying the first half of their annual $54,110 in property tax on the multi-million-dollar condominium unit that they co-own in a building at 1 Broad St., Stamford, city records show.

The first half of the annual tax bill was supposed to be paid by Aug. 1, but was delinquent as of early September, with $28,272 due as of Sept. 4, apparently including interest, the city’s website still showed on Friday.

McMahon’s campaign has been slamming Democratic opponent Chris Murphy in recent days for being late on mortgage, rent and car tax payments.

Remember that Linda is the genius who thought it was a swell idea to attack Chris Murphy over his late mortgage payments (which he worked out properly) when she herself stiffed banks and creditors to the tune of over a million bucks in her 1970s bankruptcy.

And just today she figured it would be a good idea to finally settle with all those businesses and individuals she screwed out of their money three decades ago! Like, oh sure, thanks for your prompt payment! But when Chris Murphy paid up his debts within a reasonable time frame, oh HE was the one guilty of a moral failing! Yeah, right!

Anyway, here's what it boils down to: if you want a billionaire in the Senate who doesn't pay her taxes on time; waits 30 years to make good on her bankruptcy (even though she's made hundreds of millions during that time, but pays only when she wants to win an election); and runs a business where part of their lovely strategy for "family entertainment" is to kick guys square in the NUTS, then Linda McHypocrite is your man!

Remember Linda McMahon's supposed rally in Milford back in 2010 when she was running for Senate the first time? Our Republican mayor (at the time) held a rally on a lovely Saturday on the lawn of the City Hall, and maybe 200 McMahon supporters showed up. There were more people on the steps of City Hall than in the crowd! They were hoping for thousands! And Richard Blumenthal won the election easily.

What it boils down to is that people just don't care about McMahon. Maybe if CT Republicans came up with a candidate who doesn't reek of a carnival side-show and billionaire tax breaks, they might get the voters interested. Until then, this is the sort of crowd you can expect, where Democratic protestors nearly outnumbered McMahon's supporters: