...and why does anyone care?

Apparently Rep. Jim Himes (CT-04) has an opponent for his seat in Congress.

But as far as I can tell, nobody has ever heard of him.

Something weird is going on with his campaign communications though. One of Obsitnik's communications people, Steven Rosenbaum, has a Twitter account that somehow grew from a handful of followers to over 3,000 almost overnight. This happened nearly to the day he was hired. 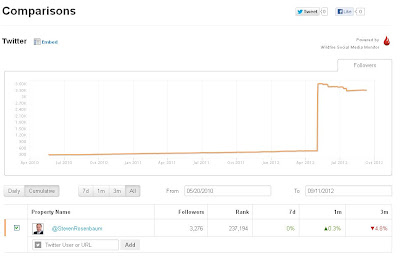 Now, I'm probably the last one to know this, but it's amazing simple (and cheap) to "buy" followers for your Twitter and Facebook accounts. An article in the New York Times discusses this at length:

It may be the worst-kept secret in the Twittersphere. That friend who brags about having 1,000, even 100,000 Twitter followers may not have earned them through hard work and social networking; he may have simply bought them on the black market.

And it’s not just ego-driven blogger types. Celebrities, politicians, start-ups, aspiring rock stars, reality show hopefuls — anyone who might benefit from having a larger social media footprint — are known to have bought large blocks of Twitter followers.

So, you can pick up 3,000 new followers to make you seem more popular than you are for less than a measly double sawbuck (does anyone use terms like that anymore? It's a twenty for those of you under 50)

This practice is especially upsetting when I think about how I went out and earned every goddamned ONE of my 284 Twitter followers the old fashioned way; by begging, cajoling, and threatening. Yup, every one of my followers are close personal friends for whom I have nothing but respect and appreciation.

For example, check out these dear, dear followers:


OK, so maybe I've never even heard of like 80% of my followers. So friggin' what?

Anyway, this entire topic came up because of a kind of weird Twitter exchange between Rosenbaum and Jim Himes yesterday, which was September 11th. Jim posted someone about remembrance of the day, which drew a bit of a nasty retort from Rosembaum: 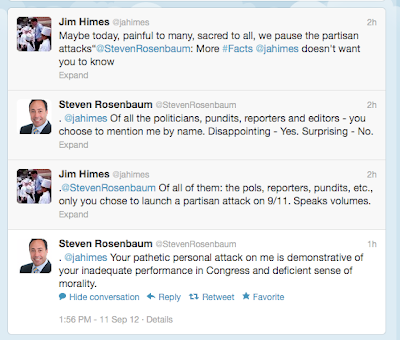 The guy attacked the Congressman over his 9/11 statement. Jesus! With roughly two months to go before the election, isn't it possible for a campaign to take one single day off from partisan hackery?

Although, two years ago I remember the Tea Party rally held in Bridgeport, and one of the stars of partisan hackery, Ms. Ann Coulter, stood in the rain and used the national day of remembrance to lead a hate-fest directed at the president, complete with signs comparing Obama to Hitler.

So yeah, I guess it might be asking too much to expect some Republicans to show a little respect on 9/11.

To be fair, Rosenbaum wasn't the only one making an ugly partisan attack on 9/11. Romney did the same thing. It's all they know how to do - attack, attack, and give the rich a tax cut.

Anyway, Congressman Himes has done a fine job. Glad to see he'll have an easy road to re-election.

Yeah, I really don't think Himes is going to have much of a fight to win again. His record and demeanor works well in the 4th CD, and I'd be surprised if he didn't win this one walking away.

Now, talking about the senate race, I think Linda McMahon can give Chris Murphy a much bigger challenge, but ONLY because she has unlimited funding to throw as much mud as possible against a fine Democratic congressman. But just as likely, she'll lose again, because generally CT voters have some sense of reality when it comes to choosing their leaders.