Whenever I appear at a political event as part of the media, I make no effort to hide my identity or attempt to execute some hidden agenda. I wear my ID badge on my media tags and never hesitate to reveal my name and website when asked. Even at those events where I'm clearly not in agreement with the prevailing political philosophy, I play it straight and do my job.

Which is why this guy annoys me so much. 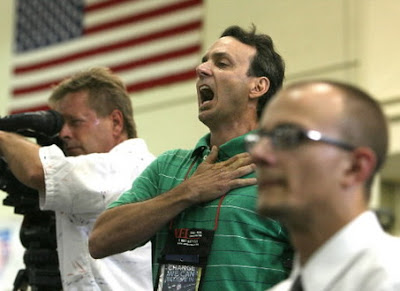 Apparently, some idiot received a press pass for the media platform at a town meeting in Ohio where Barack Obama spoke yesterday. The guy decided it was his duty to interrupt the presidential candidate while he was speaking and scream that he absolutely needed to recite the Pledge of Allegiance right NOW! Much to his credit, Barack Obama didn't try to shout the guy down; in fact, he led the entire gathering in the Pledge, which was very classy and served to diffuse what could have been an ugly incident.

Now, I don't have a problem with somebody on the floor of a public meeting wanting his opinion to be heard (although it's rude to shout like a maniac when someone else is talking), but I do strongly object to this guy's use of the media riser to make his point.

The media riser is a platform that's supposed to be used solely by people from the media (and political blogs these days) for covering the event, not for making political statements. By applying for and receiving media credentials, in effect the guy is saying that he is there for the purpose of reporting or photographing the event. If he insists on making a spectacle of himself, he should wait in line and get in with the rest of the private citizens, and not use false pretenses to give himself a very visible stage from which to spew his hidden agenda.

I use the word "agenda" because of what happened afterwards.

When the speeches ended, the other "honest" media on the platform asked him who he was and what motivated his outburst. The guy was very indignant and refused to identify himself or explain his motivation, except for some awkward rationalizations that public meetings should always start with the Pledge of Allegiance.

Well, a little digging by the Cleveland Plain Dealer (photo credit above) exposed why he was so reticent to identify himself. His name is John Quinn of Parma, OH and (surprise, surprise!) it turns out he's a registered REPUBLICAN!

Obviously, the GOP is so threatened by Obama's candidacy that they've taken to sending in covert operatives under the guise of media to try and precipitate some kind of embarrassing incident. This is just another example of the sort of dirty tricks the GOP has long been associated with. Back in 1972, Nixon's Committee to Re-Elect the President (C.R.E.E.P.) made dirty tricks part of the political lexicon once the Watergate hearings exposed their methods.

But the GOP of the 21st century is now taking dirty tricks to the level of an art form. They learned their lessons well from Karl Rove. Don't be surprised to hear about more and more of these kinds of things happening as we get closer to the election. If there's one thing I know about the GOP, it's the fact that they'll never pass up a chance for intellectual dishonesty if they think there's any advantage to be gained by it.

Here's the video; you watch it and decide on this guy's motives:

When the ranting and ravings of a lunatic become the news story that person no longer has the right to wear a media badge, IMHO.

You have an agenda. But, like you say, you try and respect the privilege of being allowed to cover an event. For that reason, most politicians around these parts will let you cover their events... But they are taking a risk if they stop to let you interview them or ask a question. Only because you have a tendency to ask questions the old media avoids like the plague.

Just my two cents worth...

"My illness helped me to see that what was missing in society is what was missing in me: a little heart, a lot of brotherhood. The '80s were about acquiring — acquiring wealth, power, prestige. I know. I acquired more wealth, power, and prestige than most. But you can acquire all you want and still feel empty. What power wouldn't I trade for a little more time with my family? What price wouldn't I pay for an evening with friends? It took a deadly illness to put me eye to eye with that truth, but it is a truth that the country, caught up in its ruthless ambitions and moral decay, can learn on my dime. I don't know who will lead us through the '90s, but they must be made to speak to this spiritual vacuum at the heart of American society, this tumor of the soul."

This is not about politics, media, or even agendas. This is cut-throat intimidation by an individual who - like terrorist organizations, the insane, and those belonging to myopic cults - are willing to violate every and any boundary to fulfill their desired "goal".

This fellow is no different from the people who stole the 2000 election with intimidation tactics or the individuals in the weapons labs who subverted the postal service into delivering anthrax during America's days of crisis.

These people who wrap themselves in the flag or god or whatever high-minded ideals they espouse poison democracy, the flag, and god by misrepresenting it all.

Pledges extracted through coercion, fear of public humiliation, and media subversion are acts of sabotage on our republic and should be treated as such.

And today's standard practice of treating the press pass, the priesthood, and the humanitarian aide worker as a Halloween costume for police, political subversives, and the like must stop.

Humanity desperately needs to honor neutral ground fanatically or there will be no such thing as honor.

You mean to say that he didn't have any kind of agenda? Do you really think this guy just goes around to public meetings and throws a hissy fit whenever one starts without the Pledge? Is that what you're saying here?

I haven't had a lot of time to vet this guy so forgive me but...

John G Quinn is a legitimate photographer who, assuming his credentials were vetted, deserved to be given a press pass as a photographer.

By those press standards, the press has no right to become part of an event except as co-incidental or passive subjects. So he violated an extremely important ethical condition for being part of the press corp. However, that is not a crime.

Did he know better? You bet. Here's a quote from him from a photography website featuring his profile, "Good journalism exists when the photographer finds the right moment and captures it without interference." So he has no excuses.

Do the press have agendas? We all do. Yes. But we have a right to observe events to comment on them or to report on them accurately, not to become part of an observational event for any reason.

I could care less that Quinn had an agenda. Let's be generous and even allow for the idea that he's a conscientious objector. In that case he should have not used a press pass and should have had the courage to stand up and identify himself in the crowd as whoever he was. It still doesn't make him a criminal - a COWARD but not a criminal.

But let's examine the series of events. From what I can make out Obama was not the first speaker, this was not THE town hall meeting for Cleveland, and the pledge is not mandatory under any circumstance. What this tells us without fact checking is that the guy is Republican because the right-hemisphere of the brain is not distinguishing a metaphorical town hall meeting from the real thing. Republicans can't understand such things - they aren't wired for it. So that explains a lot there.

As for the Pledge of Allegiance, it was written by a socialist with the intention of forcing the Confederacy to surrender allegiance to the Union. Democrats should insist the Pledge be taken in all Red state and Fox News worthy gatherings. This is a good thing. Quinn didn't know it very well and should be forced to learn it.

Nor was Quinn facing the flag. Although the postal service's latest stamp has fourteen stripes on the flag there are actually thirteen. These represent Americas Liberal values, all blue states. Quinn desecrated the flag by turning his back to these liberal values and deserves to be taken to task for it. Yessir.

But finally, Quinn is a soft terrorist. His act was solely intimidation. No nation has lost more great leaders to violence than ours. Quinn reminded everyone of how fragile democracy is. And that is what unnerves us.

Guerrilla theater...I cant see from the picture, did Mr. Quinn have his American Flag lapel pin on?

When I went to a so-called "town hall meeting" for John McCain in Westport in April, none of us there recited the Pledge. Where was John Quinn to help us then?