Tonight was the kickoff for the Lamont for Senate petition drive. Meetings were scheduled across the state for 7PM to show volunteers how to collect verifiable signatures, but the Norwalk meeting also featured a 6PM happy hour at O'Neill's Cafe, a local pub. 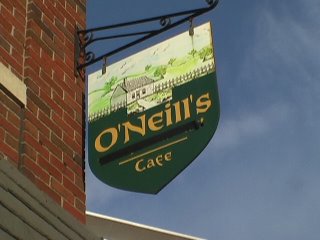 Ned Lamont arrived, and as usual he was very accessable. He took plenty of time to greet and talk to anyone who wanted to meet him. Then he spoke for a bit about the petition drive, before leaving for another meeting in Fairfield.

Suddenly it was a couple minutes to 7PM, so we chugged our beers because it was time to go over to the campaign office and learn about the petition process. A total of maybe 50 volunteers showed up for the meeting.

I videotaped both the happy hour kickoff, and the meeting itself. I put together a short video that shows Ned arriving at the pub, listening to the voters, and then speaking. The video runs about 2:17. Take a look.

Tomorrow I'll have more info on the petition drive...