Yesterday I joined Lamont-campaign Media Coordinator Liz Dupont-Diehl (below, left) at the Borders book store in West Hartford to interview Murva Jackson, an activist in children's education issues. Borders graciously allowed us to tape in a corner of the store during a busy Saturday, and Liz and I gratefully purchased two copies of "Crashing The Gate", and it was at full retail too! 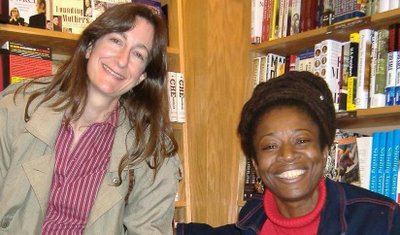 Murva spoke about the issues concerning Connecticut, including education, health care, the War in Iraq, among others. She stressed that while it's important to take care of international problems, we need to concentrate most of our resources on the people right here at home.

I taped the interview, which is apparently going to be part of a 30-minute Robert Greenwald-produced DVD, to be played at Lamont fundraising appearances. I hope I did a decent job of it, and I asked Liz to be sure to get feedback about my video techniques from the editors (who knows? I might even get Bob Greenwald himself to critique it...and yeah, I can call him "Bob", because after all, we're both in the same creative field!)

This was all put together with very little lead time, and plans for the location were changed at the last minute, so I was working with almost no prep time. I chose a spot for the interview that had reasonable lighting, and positioned the chair in a good spot. The only drawback was that it was in the Political History section, and there was a big picture of Che Guevera on the cover of a book right over where Murva's right shoulder would be. 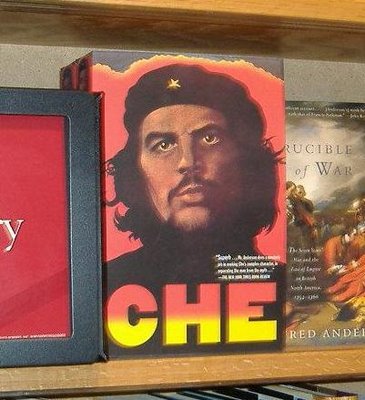 I didn't want to send a confusing message to the audience, so before she got there, I turned the book around. After the interview, I said, "I guess it's safe to put this back the way it was," and I turned the book back over. Murva got a big laugh out of that. 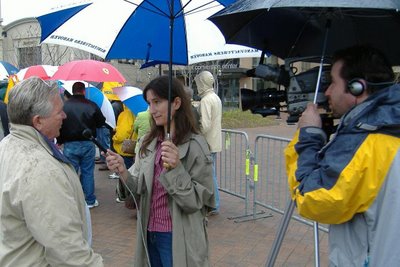 After the interview, Liz asked if I wanted to go over to a Labor rally at the Hartford Convention center. I said sure, but when we got there it was raining fairly heavily. I didn't think I'd be outside in the rain, so I didn't bring any rain gear. I tried to set up my camera, but I decided the weather was too wet to chance ruining it, so I called it a day. Besides, there was another person taping interviews, so there wasn't much I could do. If the weather was nice it would have been fun to walk through the crowd and interview people at random. Oh well... 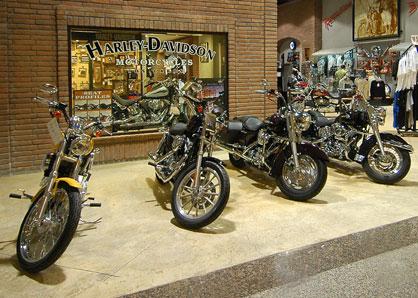 Plus, there was some kind of motorcycle convention at the hotel next door, and every few minutes or so a Harley would rumble to life, then throttle up at a kazillion decibels for a long while, then roar off down the street. This was repeated the entire time I was there, so any audio recorded there will sound more like Sturgis than Hartford!
Posted by CT Bob at 4/23/2006 11:02:00 AM

I'll be keeping my fingers crossed for Ned Lamont. (I can't do anything more than that; while my parents are from CT, I'm Canadian.)

I found this interesting:

"...it's likely that either Joe will sit out the 2006 election if he doesn't win the primary, or he will remain in the race as in independent with signatures that will likely have been collected while he was running as a Democrat!"

Following our recent federal election, a Liberal party member accepted a post in the Conservative (right-wing) cabinet, infuriating the supporters who had elected him. Over the past few years we have seen a lot of party-jumping in Canada by people more interested in advancing their political careers than in representing their constituents.

Calamity - regarding Lieberman running as an Independent, it's true; there just won't be enough time for him to get the signatures. And if he uses signatures gathered towards an Independent run while campaigning as a Democrat, he'll get completely roasted in the media.

I don't know how a candidate can ever be trusted by a party after jumping ship. It's better to live and die by your party than to be a turncoat (unless, of course, you're a Republican; in THAT case, it makes perfect sense! LOL)