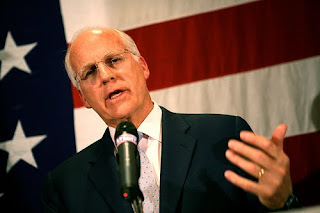 Former Congressman Chris Shays helpfully crawled out from under his rock in Maryland and, because he saw his shadow, we're now faced with six more weeks of his bullshit.

In an email to Lennie Grimaldi's Only in Bridgeport and Tom Dudchek's CT Capitol Report, Shays used some uncharacteristically scatological language to describe the state's financial situation.

Hmm...Shays is using naughty language? Just who does he think he is...a blogger?!?

'Betsi and I wrestled with the fact I would relish the challenge of leading our state; felt a moral obligation to step forward; and believed I could effectively move our state government in a different direction.

The fact is "the state is in deep shit." I say it that way because folks in Hartford (press included) and the public seem to have no clue how bad things are.

Never mind what he and Betsi wrestled with, Shays doesn't mention anything new nor helpful, and his comments can simply be seen as his typical self-serving quest for attention. Everybody's gonna be all like, "Gee, he used a naughty word! This fella' must mean business!"

That thing about "the folks in Hartford and the public" not having a clue how bad things are is something of an insult. Apparently we're all saddled with the intellectual capacity of pre-schoolers, because we're simply too stupid to realize that there's a budget crisis going on!

Well thank god that Chris is here to fix everything! I'm sure he'll leap into the governor's race and run a great campaign and win and take care of that mess in Hartford:

That's a challenge I could have sunk my teeth in. But for the present I have a different role.

Oh. Okay, fine. Well, thanks for all the help, Chris.

Am I getting this right?

First he says something about "deep shit," and then he talks about "sinking his teeth in."

Why, this only serves to confirm some suspicions I've had about him for quite some time now.

"Raw, raw, raw, now that's the kind of spirit we have here in this fine state..."

(Shamelessly stolen from The Firesign Theater)

Chris must feel that abiding in the land of Mencken has given him new clarity. He's coming to rescue us benighted nutmeggers.
"Every decent man is ashamed of the government he lives under." HLM


However, Shays is DEFINITELY a better deal than Himes!

I'm hard pressed to find anything Himes has done for us -> remember, he had a massive stimulus bill to stick earmarks into and he got crap! A few bucks for some boyscouts and what else?? Nothing! He sucked for us! Nothing concrete. Shays would have done far far better. No doubt in my mind.