While all this media attention is being lavished upon the big vote for health care reform, currently scheduled for tomorrow, we've reached another milestone in American history almost without anyone noticing.

Friday marked the seventh anniversary of the start of the war in Iraq.

I'm not quite so naive as to think that the moment Barack Obama took office he'd order an immediate withdrawal of all our troops from the war-ravaged nation. I realize that would lead to chaos and an inevitable need for our return to the region.

But I would like to see some positive signs that progress is being made.

Iraq just had another round of elections. There were many fewer photos of proud Iraqis holding up their purple stained fingers this time around. Because we've seen it all before, and nothing much seems to change.

In about six weeks, we'll celebrate another dubious anniversary: 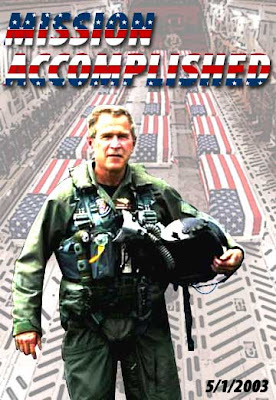 "Mission Accomplished Day"
Can we maybe just declare victory, give a shitload of small arms and ammunition to the Iraqi military, and leave?

Bob; You do know that the withdrawal of combat troops is ahead of schedule, right?

American troops have been turning over responsibilty for more and more areas to Iraqi forces.

We don't need to declare victory and leave as we are in the process of leaving. We at least have given them some chance to maintain a democracy when we are gone, but it is the Middle East ......

What the future holds for Iraq, who knows. But our involvement is in fact rapidly winding down.

I've never been a big fan of Obama's overly cautious plan. There's too much wiggle room for us to be stuck there for years more. I just want to see us out of there.

And why didn't ANY of the media give more than a passing mention to this anniversary? Doesn't anyone care anymore?