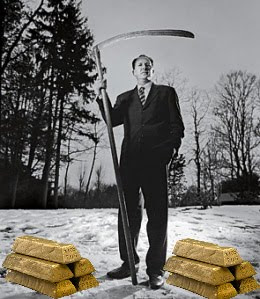 Republican senate candidate and financial pitchman Peter Schiff once again is encouraging Americans to invest in overseas funds rather than work to bolster the US economy.

At a gathering of Tea Party supporters in North Haven (as reported in the CT Mirror) Schiff extolled the virtues of buying gold offshore and burying it in your backyard. Coincidentally, Schiff also announced that he's close to launching a company named "Euro Pacific Precious Metals".

Guess what you can buy from them?

Schiff is somewhat famous in the financial community, sometimes called "Dr. Doom" for his negative forecasts regarding the US economy. His cynical prognostications are somewhat self-serving, considering he is the owner of "Euro Pacific Capital", a brokerage firm that lists TWO major continents in its name that don't include the one where the United States is located! 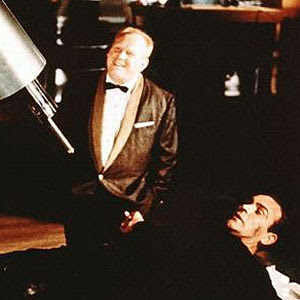 "Do you expect me to talk?"
"No Mr. Bond, I expect the US economy to die!"
In nearly every single news story about this guy, they refer to how he brilliantly predicted the economic crisis a few years before it happened. Let me tell you something; all Schiff did was look at the numbers and make some projections. I have a friend who was telling me the exact same thing way back in early 2006, only he wasn't on CNBC saying it. At the time, I was very busy covering the 2006 senate campaign and essentially brushed his concerns aside.

And that's exactly what the financial community did back then. Many people absolutely knew the market wasn't sustainable and a crash was inevitable. Instead of trying to fix it, all they did was figure out ways to cash in before the bubble burst!

By the way, I now firmly believe that my friend is the reincarnation of Nostradamus, and I insist he only speak to me in quatrains!

Schiff sees the U.S. economy unraveling. The debt is unsustainable, made tolerable for the moment only by interest rates kept artificially low by a meddling central bank, the Federal Reserve.

He likens the government's fiscal and monetary policies to a Ponzi scheme, destined to collapse when when China and other foreign lenders finally cut off credit.

"At some point, they are going to look at the U.S. and decide we can't pay it back," he said.

The dollar will crash. Interest rates will rise, fueling inflation that could leave currency worthless. And that's where the gold comes in.

"You have to have real money, gold and silver," Schiff said. (emphasis mine)

Schiff also compared the future US economy to the runaway inflation of the post-WWI German Weimar Republic.

Now here is Peter Schiff, and instead of suggesting long-term solutions and a workable plan to economic recovery, he tells the gullible crowd at the gathering (and let's face it; these people don't set the bar very high when it comes to skepticism) that the best solution is to buy gold from Australia and bury in their backyards. 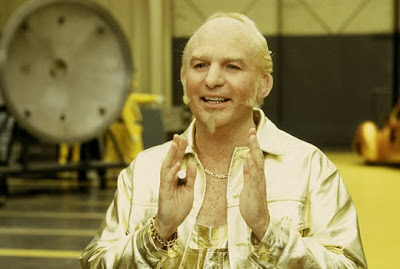 "I love gooooooold!"
Schiff may have a long way to go to convince these people he's the one they should support. The Tea Partiers try to wrap themselves in a veneer of Libertarianism, but all too often their own words betray them as far-right Republicans:

It was unclear if Schiff found the right demographic at the Holiday Inn for his pitch about gold or his candidacy. Organizers had to pass the hat to offset the $650 cost of the conference room, and not even Tea Party leaders like predicting where the movement's activists will show up on election day.

Tanya Bachand, one of the organizers, said she likes Schiff's economic message, but a significant portion of the movement are opposed to abortion.

"He's pro-choice, and that's difficult," she said. (emphasis mine)

That, coupled with Schiff's reluctance to commit to tightening the borders against illegal immigrants, may make his candidacy a tough sell to the TPers.

Me, I'm gonna go to the refrigerator and renew my membership to the ...

Paul Krugman was predicting an economic collapse in his New York Times column since at least 2007.
His focus was on housing prices, which support mortgages. We know now what that all meant.
I've never heard of this Nobel Prize winner peddling gold at Holiday Inns.
Glenn Beck might though.
oldswede

There's one nagging question I have about Schiff's gold scheme. If the economy has collapsed and the banks are closed, what is gold good for?
It's not edible and you can't take it to the supermarket or the filling station. It's just a lump of inert metal that people imagine is very valuable.
Hey buddy, got change of an ingot?
oldswede

Gold can exchange for any items you can think of.

The best way to protect yourselves is to diversify away from the dollar.

Funny how the vultures can't wait to feast upon the wreckage of the American economy. This guy just reinforced my point.

Pipe and a pancake? Cigar and a crepe?

Yeah, and I want to know how I can get a pastrami special with grilled onions and fries if all I have is a one-ounce bar of gold and the national currency is worthless.
No bartering.
Just the sandwich.
oldswede

"You know, a flapjack und a shigarette?"

I'm thinking we'll have to reinstate the old "pieces of eight" gold standard. Where you slice out wedges of gold coins to create lesser denominations.

Or we can go to the "gold bank" and trade a 1 oz. Krugerrand for 1 oz. of gold dust, and using your portable triple-beam balance dole out the appropriate amounts needed.

Yeah, much better than using money.

First off Schiff is a nutjob, shares alot of his jailbird fathers economic illogic.

However the main thing he and other charletans leave out with their gold theories is quite simple and quite basic. If we lived in a world where barter was the norm and gold was the "currency", then there would be no civil order, if you had gold you would be killed for it, there would be no production, any food would be scarce etc. etc.

In fact we would have a world that would be not far removed from the dark ages.

People like Schiff are only pushing gold for their own enrichment, sorta like internet truthers and birthers. They line their pockets with the money of the gullible and not to bright.