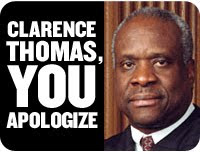 I've got the feeling that Supreme Court Justice Clarence Thomas would have simply preferred for his wife to keep her big fat mouth shut. Even a dolt like Thomas would know that the backlash from his wife having the balls to ask Anita Hill to fucking apologize to her poor misunderstood husband would be loud and embarrassing!

Not since Martha Mitchell has a Republican haus frau caused so much consternation among GOP insiders. Well, here's a little pushback for ya, Ginny:

It's been 20 years since Anita Hill courageously spoke truth to power and exposed Clarence Thomas as a stalker and a sexual harasser during his Supreme Court confirmation hearings.

And now Thomas' wife Virginia Thomas, a right-wing Tea Party advocate, in a move as brazen as it is offensive, has asked Anita Hill to apologize to her abuser. Hill said no. But I say it's long past time for Clarence Thomas to apologize to Anita Hill.

Virginia Thomas' agenda in approaching Anita Hill with her outrageous request is unclear. But it's yet another example the Tea Party adherents brazen attempts to rewrite history and claim victimhood for the powerful even as they launch attack after attack on minority groups -- be they women, gays, African Americans, or immigrants.

We shouldn't ignore this bizarre incident. We should accept Virginia Thomas' challenge and defend history as we know it.

Join me in telling Clarence Thomas he should apologize.

It's easy to do so at the link below. 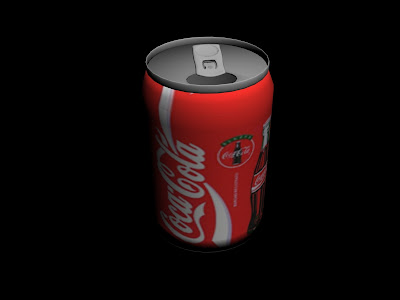 Also, Ginnie has been canceling her public appearances that have been planned for the next week or so.

Jeez, I forgot all about the "Long Dong Silver" thing!

I think my comparison of her to Martha Mitchell isn't all that far off, except ol' Martha used to drunk-dial reporters and complain about stuff the president's staff did, not try to get people apologize to her husband.

Martha was a blast compared to these folks.

yeah, Martha was really something. Ginnie is just a sad sad woman.