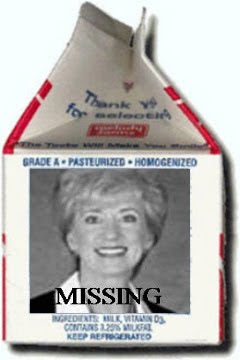 Or maybe a chicken.

As Paul Bass reported in the New Haven Independent:

8:33 Republican Rob Simmons is up here in the press room to spin for McMahon-but no McMahon! Blumenthal stops by to spin with reporters. He's relaxed; he get softball questions. McMahon, who showed up to answer questions after the Bushnell debate, is nowhere to be found. She fled. Is that because her handlers felt that last session went off track? Or because they didn't feel she did well tonight? Either way, from her on in, it's all scripted campaigning, all the time...

After the debate, a beaming Blumenthal met reporters to talk about the debate. McMahon, who lingered after the first two debates, left the building without comment.

A few days ago I commented on Linda's quick exit from the Milford rally, where she stiffed the dozens of supporters who showed up to meet her when she spoke for less than ten minutes and fled without answering questions or even pressing the flesh at the embarrassingly small gathering:

McMahon felt so defensive after her botched answer to the minimum wage question that she refused to talk to reporters after her triumphant totally underwhelming Milford rally Saturday with special guest tea-bagger Mass. Sen. Scott Brown (video here). To pass on the opportunity to talk to the press after an event like that is, quite frankly, shocking!

My guess is that Linda will hunker down as much as possible for the remaining three weeks to avoid having to answer off-the-script questions. She obviously believes it's better for her to keep quiet and have people think she's a fool, than to open her mouth and remove all doubt!

Linda McMahon is hiding from the press, and she hopes she'll somehow eke out a win based solely on her megafunded TV budget. Because lately, every time she opens her mouth to reporters, she's in grave danger of having her remarks blow up in her face.

Much like they did when she failed to answer NO to the question about whether she would consider lowering the minimum wage. But Linda wasn't around last night for anyone to even ask her to clarify her response to the minimum wage question.