I just got back from the big rally in Bridgeport. I have about 90 minutes of footage to transfer and edit, so I probably won't get any video up until tomorrow. 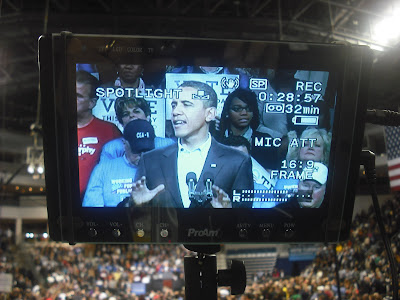 The President is shown on my awesome new LCD video monitor atop my camera. Everyone who sees it is jealous. Makes shooting video much easier! 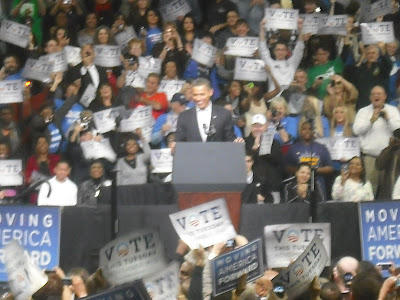 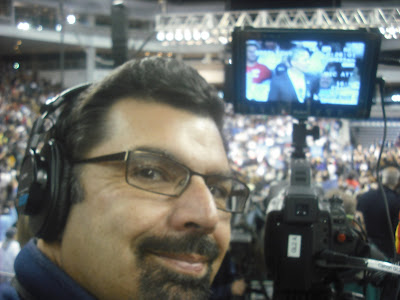 Anyone who reads this blog regularly knows by now that it's always about me! 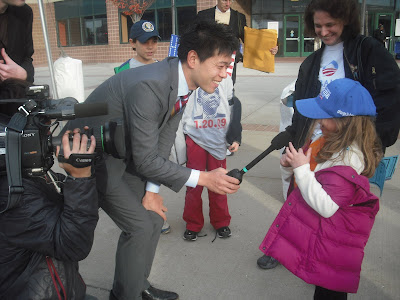 These guys from the Fuji Television Network interviewed me for broadcast on Japanese TV after talking to this adorable little girl. Hmmm, I wonder which interview will end up on the cutting room floor? (Hint: it probably won't be the kid!)

On the other hand, I did mention my blog's URL several times. If I suddenly start getting tons of hits from the Far East, I'll know I made it on the air.

if Blacks and lations come out like they did at harbor yard today then Dems will win!!!! i had fun!!

Who were all the hecklers and who let in all the people who booed and yelled for 3 or 4 minutes?

According to several sources, they were AIDS activists, demanding attention. The New Haven Independent reports, In Bridgeport, Obama strives for hope, fends off hecklers. Obama basically told them to go bother somebody who really is ignoring the AIDS crisis.
oldswede

Hi my daughter was the adorable little girl (thanks for that). Please let us know if you find out about the interview airing!!!

Wow, and then you saw her picture on my blog! That's awesome!

The Fuji Network doesn't stream their news on the internet (I asked), and they only broadcast it on TV in Japan. So unless I hear back from the producer (he has my card) I won't know it will ever be shown.

But I'd guess from the way the interviewer looked charmed by her, she'll probably be a big hit in Japan shortly!