Lots of Milford police got a day's worth of overtime, city public works employees picked up some juicy weekend pay, and they even closed a street to accommodate the expected swarms of tea baggers that would surely descend on our "small city with a big heart" (or "small heart" as a local GOP hack exclaimed) for the joint Linda McMahon and Massachusetts Sen. Scott Brown rally.

Sadly for Linda, her big rally was more of a whimper than a big bang. A local reporter said that she estimated there were 600 people in attendance. 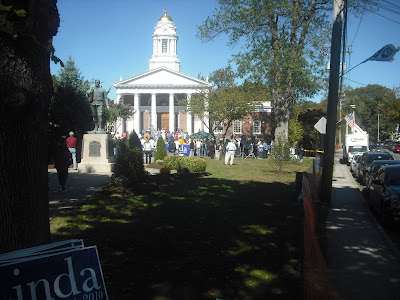 This photo was taken right before the slightly delayed start of the rally. Much less than the expected 1000-1500 organizers hoped for. And 600 is being very generous. Take the 100 or so VIPs and party insiders behind the podium on the City Hall steps, then subtract the various media and press people walking around and on the riser, the dozens of police and public works employees, a large field campaign staff, and of course, the counter-protesters holding up anti-Linda signs, and you might end up with 300 or 350. Tops. 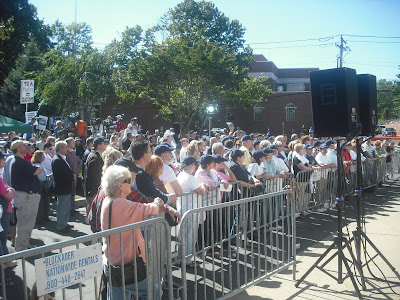 But people like to exaggerate results, which is why Linda's website is laughably claiming she won the debate against our next Senator, Dick Blumenthal. The photo above pretty much shows nearly the entire crowd. If there's more than 300 people in that scrum, I'd be shocked.

UPDATE: Fuck!!! I can't believe I misspelled the word "demonstrators" in the opening title of the video! That's what I get for having a couple Murphy's Ales at the Seas before going home and editing the video! Serves me right for drinking Murphy's...I never make spelling errors on Guinness...

UPDATE 2: Sorry about saying the word "fuck" before. I really do need to work on my vocabulary a bit. It's a bad habit that I can't seem to break.

UPDATE 3: Ah, who am I kidding? I love being an grown-up, and having the freedom to use adult words like "fuck" any time I want. I refuse to accept that we're all infants in a nation of children who need to be protected from words like that. It's my blog and I'll "fuck" if I want to! Besides, it obviously works for Rahm Emanuel, right? If you're offended by that, I'm truly sorry...

You can bet that the 'official' campaign photos of this event will be severely cropped.
Have you seen the new little video from the Washington Monthly site yet?
It's called GUESS WHO'S VOTING? Inspired work.
oldswede

The official McMahon twit-pic shows the crowd from the side near the stage, giving the impression that there are way more people standing behind them. Of course, it doesn't show the nearly empty park that was specifically cordoned off to be filled with over a thousand people that didn't show up. And they closed a STREET for the overflow.

I bet our mayor feels like a dummy for providing such a poor turnout.

I wonder if McMahon will show a video clip at her rallies from the simulated sex with the dead that the WWE put on TV while she was CEO. Her current son in law performed in that scene.

You are silly. FUCK is no big deal. Indiscriminately saying it is one thing... but indiscriminately DOING IT is the key to the White House in your party. You have at least earned a mid-level position with your profanity.

I can only hope.

Grow up, you pathetic douchebag.

Tea parties are for little girls and their imaginary friends.