Kudos to the legislature 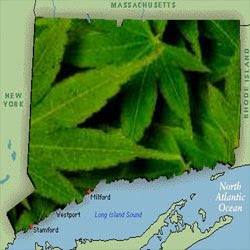 (Why the heck is Milford spotlighted in this image?
Is there something going on here that I don't know about?
image *of course* via The Weed Blog)
In just the last couple of days, Connecticut's legislature have passed some very important bills.

On Saturday, Lt. Governor Nancy Wyman cast the tie-breaking vote in the Senate that decriminalizes small amounts of marijuana. The bill will move to the House, where it is expected to pass with ease, and then to Governor Malloy's desk. Malloy has already said he'll sign the bill into law.

This is a case of common-sense legislation. The decriminalization of pot will reduce the amount of offenders who are jailed for possession, while keeping penalties in place for dealers and smugglers.

Also early Saturday morning, the House passed the Paid Sick Leave bill by a vote of 76-65, with 16 Democrats joining the Republicans in opposition to the bill. The governor has also promised to sign the bill. Connecticut is the first state to pass a paid sick leave law.

And finally on Saturday morning, the Senate passed the Gender Identity Bill, making it illegal to discriminate against anyone based on their gender identity. Again, Gov. Malloy supports the bill and is expected to sign it into law.

Read more about these stories at CT News Junkie.

(...and will somebody please tell me why Blogger inserts a random "http://www.blogger.com/img/blank.gif" into every goddamn one of my posts? Sometimes I miss it when they sneak one in.)

UPDATE: Turns out that it's a Firefox issue. For whatever reason, when I try to insert a hyperlink into the text, if I click on "OK" in the link box, it inserts that blank.gif thing right where my mouse pointer was located. If I simply hit Enter instead, no blank.gif. Apparently there's plenty of discussion about this already, and it happens with the new Firefox 4.0 only. (thanks Beau!)
Posted by CT Bob at 6/05/2011 07:43:00 AM