Tolls being revived for Route 11 completion 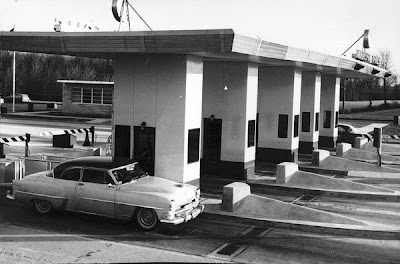 Yesterday the House passed a bill that would allow tolls to be placed somewhere on Route 11 to help finance the highway's completion. CT News Junkie has more:

Shortly after midnight the House passed a bill 76 to 60 that allows the Department of Transportation to temporarily resurrect and collect highway tolls on Route 11 in the southeastern part of the state.

The temporary tolls will be used to pay for the completion of the highway, which currently stops about 8.5 miles short of its planned completion in Salem.

My concern is that this opens the door to reinstating tolls on other highways.

Since 1979 I've worked in jobs that required a lot of driving. During many of those years, I spent a lot of time waiting in traffic to get through the toll booths. Milford was probably the heaviest tolled city in the state, with I-95 tolls bracketing the city in Stratford and West Haven, and the Route 15 toll on the east side of the Housatonic in Milford.

And who can forget the traffic nightmares on I-95 in Fairfield County, where rush hour slow downs now occur even without tolls pretty much any time of the day?

House Minority Leader Lawrence Cafero, R-Norwalk, had a difficult time wrapping his mind around the idea that the state was going to temporarily resurrect tolls...

“We’re creating tolls we can’t describe or tell you what they are or where they’re going to go,” Cafero said.

Rep. David Scribner, R-Brookfield, urged his colleagues not to think about the bill as a completion to Route 11, but a change in policy that permits tolls to be placed on Connecticut highways.

With gas prices currently hovering around $4 a gallon, the last thing we want is to sit idling in a toll line for 15-20 minutes at a time. We need to carefully examine where and how the tolls will be implemented, and be assured that this doesn't open the door to additional tolls around the state. If the tolls are ONLY used on Route 11 to complete the highway, that's reasonable. It's in a fairly rural area and traffic likely won't be significantly impacted.

But the minute they start kicking around the idea to put tolls on other major roads in the state, especially in high-traffic urban areas, that's going to be a problem.
Posted by CT Bob at 6/02/2011 08:30:00 AM

I haven't encountered that many tolls in CT. We live upstate and use Boston Logan for our flights. The tolls are exorbitant if you don't have an E-ZEE Pass. Where does the money go? Drive up to W. Springfield and many streets have no signs, subsequently even a GPS doesn't help. And they have THE WORST roads ever (go up RT 159 sometime - I ruined a tire on a ginormous pothole.) I assume the money is supposed to go to road upkeep, etc, but I've yet to see it in MA.

I don't mind paying tolls, and taxes when they are earmarked for specific problems. I do resent paying them and seeing no progress.

Yeah, the tolls in Connecticut were removed about 20 years ago due to a series of horrific crashes that occurred.

Unless specifically marked for highway funding, it seems toll revenues always ends up in the general fund. I hope the Rt. 11 toll is required to use every dime to pay for the road, and then removed. We'll see.

If you do have to deal with tolls on a regular basis, an EZ-Pass is definitely the way to go. The discounts you receive on most tolls more than makes up for the $1/month account maintenance charge. Not to mention not having to wait in the Cash lane!

Our whole family has EZ-Passes. It's the only way to go when you drive around the country (USA) these days. I wonder if Sarah thought of that before taking her "road trip vacation?"

A few years ago, I drove thru NJ. I inadvertently went thru an EZ pass lane.

I knew I had screwed up and tried to figure it out as soon as I got to my destination. Unfortunately, that wasn't in the cards for me.

After calling numerous places, including the Chairman of the NJ Senate Transportation Committee (oversight of tolls), I concluded the the company to which tolls had been outsourced had intentionally rigged the system (with poor signage for toll alerts) to increase revenue.

I don't have a problem with that company making money. But if my belief is correct -- that they're trying to charge people $25, instead of the $1 fee -- then I hope CT maintains some real oversight and accountability.

Tim, are you referring to the deposit that is used for tolls? They periodically "refill" my account in $25 increments when my balance gets below around ten dollars. So yeah, they do "charge" $25, but it's your toll money that you use. I guess it's too expensive for them to do an individual credit card debit for each toll. Probably the reason they give you a discount on the toll.

If you all use the roads, then you all should pay for them! I don't want to pay for YOUR roads when I don't even own a car, for heaven's sake. Let's privatize these interstates once and for all, and let users pay the user-fee! It's that simple!