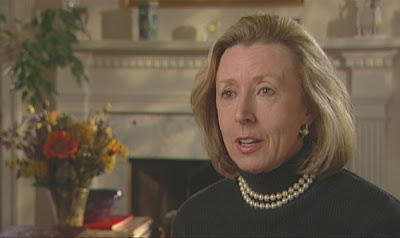 This is the sort of thing that lobbyists and people involved in fundraising organizations seem to get away with all the time. When it comes to receiving a paycheck, even the wives of US senators aren't immune to the tendency to ignore the obvious conflicts of interest.

It happens that Sen. Joe Lieberman's second wife, Haddasah Lieberman, apparently is a paid “Global Ambassador” for Susan G. Komen for the Cure, an organization that does very necessary and important work by raising significant funds for breast cancer research.

Jane Hamsher from FireDogLake raises the point that while Haddasah is being paid by this fund, her husband is working tirelessly to obstruct the exact sort of health care reform that the Komen organization endorses.

Additionally, Mrs. Lieberman herself is a former lobbyist for APCO Associates, which represents the interests of the same major, private health insurance and pharmaceutical companies which Mr. Lieberman seeks to protect.

In light of these obvious conflicts of interest, Ms. Hamsher (a three-time breast cancer survivor) is calling upon the organization to ask Hadassah to step down from in light of the inherent conflict of interest her continued presence brings.

You can help by signing the petition over on FireDogLake, and by calling Sen. Lieberman's office to personally request that the senator either change his position on health care reform or ask his wife to voluntarily step down from the organization.
Posted by CT Bob at 12/12/2009 10:39:00 AM

If she is shown to be raising money for the organization and her other activities are not hindering that work, then there is no reason for her to step down. Ms. Hamsher should if she hasn't, do some research and prove that the alleged conflicts in any way detract from the good work being done. Otherwise she should stop trying to score political points at the possible expense of current and future breast cancer victims who would stand to benefit from Mrs. Lieberman's fund raising efforts. I have a family member with the disease and know that her and most other victims would be irate that politics could interfer with funding research of this horrid disease. This is what happens when hatred reaches irrational levels, a victim of the disease would actually screw with someone who may be helping raise research funds. SOMETIMES IT JUST AIN'T ABOUT POLITICS.

But in this case it *is* about politics.

And I am sorry to have to be the one to point out that, at this point, everybody has a family member with either Breast Cancer or enough "scares" to be meaningful. If we need to show our bona fides, my only sister died fighting Breast Cancer.

While Mrs. Lieberman collects honorariums, her husband works overtime to cut funding and insurance coverage for women who need testing, surgery, and treatment.

In other words, people who have made and continue to make donations to this fund may stop their support if they find out their money is going into the pockets of "Mr. & Mrs. Anti-Health Care Reform".

Spin all you want, but prove that money is going to the Liebermans pockets or her connection is in any way affecting donations negatively. As to everyone knowing a victiom, I agree many do. BUUUUT I would guarantee you that themselves and their families and friends would LOATHE those who would withhold donations for partisan politics. Her doing work for the Koman foundation is the only thing that matters if she brings the cash in. I wouldn't give a crap if bin laden was a spokeman for them as long as he brought the bucks in to fight this disease. IF Ms. Hamsher wants to hit back against Lieberman through cancer patients hopes then obvioudly she is a very bitter and vindictive individual. If thats not her intention then she should prove her implied charges of actual not theoretical unethical behavior. I realy hope this story goes national so the great bulk of the people can see what happens with left or right wing hyper scorched earth politics. Ms. Hamsher wants Mrs. Lieberman removed? then she should prove her point rather than taking the cowards way of unproved innuendo that poisons our political system. If she states chapter and verse proof then I will sign her petition. If not she should STFU and stop screwing with a noble cause that may in fact have helped her own health. Newflash to Ms. Hamsher look at the boards and "ambassadors" of almost any charity you will find many potential conflicts of interest. But for the vast majority money is raised with no unethical behavior. My guess is that unless their political views don't conflict with hers then no harm no foul. But it is all about the politics isn't Ms. Hamsher? Screw whoever may be helped just because of politics.

"...but prove that money is going to the Liebermans pockets..."

Fact: Mrs. L is a paid "ambassador" for the charity.

From the Salon.com article: A Komen spokesperson "indicated that Hadassah Lieberman is "not an employee" of Komen, meaning that she isn't paid, although her husband's 2008 Senate financial disclosure shows that she received "more than $1000" from the charity." (and what does that mean, anyway? Can it be $5000? $10,000?)

How is receiving an amount in excess of $1000 supposed to equate to NOT being paid? I wish somebody would not pay me the same amount...I can use a new computer!

The point of all of this is that an organization that does tremendous good is inadvertently funneling money to a senator who is in complete opposition to the cause of health care reform. And believe me, it DOES matter to those who make the contributions.

At the present time any “Cure” for breast cancer includes (by definition) preventive care for early detection, aggressive and expensive treatment, and follow up care with frequent tests and pharmaceuticals that are often very expensive. These “Cures” are not possible without affordable health insurance.

Currently, health insurance companies are allowed to discriminate against individuals with pre-existing conditions. As a result, many breast cancer survivors are unable to get affordable private health care insurance.

Mr. Lieberman, whose wife is a Komen for the Cure Ambassador, OPPOSES EVERY ATTEMPT to change this status quo. Mrs. Lieberman proudly brings her husband to events such as Race for the Cure. In the photo posted at Jane Hamsher’s site (above), they are smiling and embracing each other while wearing their pink T shirts. What is wrong with this picture??? It’s very obvious to me and to anyone who has survived breast cancer.

Elizabeth, yes I couldn't bring myself to put up that photo of Joe and Haddy in their T-shirts all happy and smiling while the senator is working so hard to deprive women of the very same health care they pretend to support.

Sorry, CT Bob. When I said above photo, I was referring to the photo on Jane Hamsher's website:

No need to say sorry; I saw the same photo from the link, but deemed it too horrible to use! Thanks for your comment.