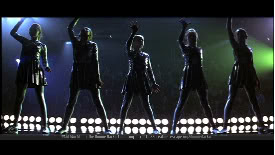 (Obscure reference alert: Sparkle Motion from the film "Donnie Darko",
because they perform a routine to Duran Duran's "Notorious"...get it?)
I always said Jane Hamsher was totally awesome, but I didn't know she was "notorious"! Here's what she said about Hadassah that apparently got Joe all riled up.

In a press release from Joe Lieberman's office today, the senator lashed back at charges that Hadassah Lieberman was doing something not real good or something...actually, I don't really know what he's talking about here.

U.S. Sen. Joseph Lieberman's office responded to what it called false statements and smears against the senator's wife, Hadassah Lieberman.

OK, so far I'm understanding what you're saying...I don't necessarily agree, but at least I can comprehend the words.

"It is a sad day when a false guilt by association smear of a spouse of a public official by a notorious political operative and blogger is given so-called legitimacy in the press,'' Sen. Lieberman's Communications Director Marhall Wittmann said via email.

How is it false to say "guilt by association"? Are you saying that Hadassah doesn't associate with the senator? Why use the word "guilt" anyway, unless there's something the senator should feel guilty about?

And what's with the "notorious political operative and blogger" thing? Man, I'd love to be a notorious blogger! Talk about having some serious 'net-cred! C'mon Marshall; how's about a little shout-out to your buddy CT Bob? I can really use a new pull quote for my profile.

"For the record, Mrs. Lieberman is not now nor has ever been a lobbyist. These McCarthyite tactics are unfortunate and contribute to the poisoning of our public discourse."

Holy shit! You can't be serious! Hadassah was never a lobbyist?

So, you're saying that these giant pharmaceutical corporations pay her craploads of money to speak because they want to hear what she has to say?

Wow. Thanks for clarifying that for me. I was under the impression that it was just a semi-transparent way to skirt the lobbying laws and allow the companies to funnel tons of money into Senator Lieberman's co-joined pockets via Hadassah's willing participation! While the senator actively works against health care reform!

How goddamned silly of me!

From the Courant 12/14/09: "Hadassah Lieberman is an important and valued Global Ambassador for Susan G. Komen for the Cure,'' the group said in an email this morning from spokeswoman Pam Stevens. "As a Global Ambassador, Ms. Lieberman is focused on helping us reach out and educate women outside our borders about breast cancer, sharing our knowledge and experience in a culturally sensitive way that is making a real impact on the lives of women across the globe. We have every intention of continuing our relationship with Ms. Lieberman in our mutual pursuit of a world without breast cancer." This is the only thing that matters. Hamsher should take her jihad and stick it. If women are helped by Mrs. Liebermans work for Koman then great. So let's see, the foundation itself wants Mrs. Lieberman to stay and says she is doing a great job. Go after the senator all you want but stop exploiting cancer victims by risking the work that the Koman foundation does. Once any group like the Koman foundation gets infected by the virus of politics, their future becomes cloudy at best. How many lemmings will stop donating now because Ms. Hamsher has twisted Mrs. Lieberman's role? If they do let her go how many on the right will stop donating because it will be to easy for the right wing loons to play the "bowed to liberal pressure" card? Let Ms. Hamsher provide proof that Mrs. Lieberman has done anything wrong in this role. Have her prove that funding for the foundation is being funneled to the senator.

"People who are racing for the cure wouldn't be racing to pay Hadassah Lieberman money" Hamsher implies by the above that money donated to Koman will go to Lieberman. It is a lie. "Important and often very personal donations made to Susan G. Komen for the Cure to benefit the sick and dying are essentially undermining their intended use. And as Hadassah travels the globe under the banner of Susan G. Komen for the Cure, decrying the inadequacies of our health care system and the desperate need to reform it, her husband is at home to kill the reform efforts we so desperately need". Regardless of what the senator is doing, to claim that in effect donations are wasted is an outright distortion and untruth. Koman has operated under this healthcare system since its inception raising money for research and providing comfort. While we NEED real healthcare reform, to screw with Koman is a petty, vindictive action. There will be collateral damage to Koman as Hamsher turns it into a political hell.

Please use paragraph breaks if you want people to read your comments. Thank you.

They are rants they don't need breaks. All emotion over a fine organization that is now in the effing crosshairs, thanks to a vindictive partisan.

Well, I can't read them.

For the millionth time, this isn't a matter of partisan politics. It's a matter of right or wrong.

(this is where you put in a paragraph break)

I'm sorry, but if you work to destroy health care, you shouldn't profit from it. In a community property situation like marriage, you are legally required to share your income. Hadassah = Joe. There's no gray area on this issue.

The Koman foundation sees no gray area either. Mrs. Lieberman raises money for them for breast cancer research. Again if the claim is made that Lieberman profits unethically from the donations to Koman, then the charge needs to be proved not implied. Obviously Koman has no problem with the situation.

That is absolutely ridiculous. Just a blogger looking for some publicity. She got it.

That's all I have to say.