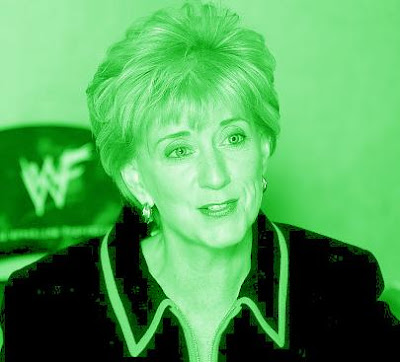 Not in the usual sense of the phrase, however. "Green" as in spreading her insane wealth around the state in an effort to buy the support of local Republican Town Committees. "Cash" is the leafy substance I'm talking about here.

John Moulson, the chairman of the Republican Town Committee in Preston in southeastern Connecticut, said the committee rejected a donation offered by Ms. McMahon’s campaign.

“We didn’t want to feel we were beholden to her,” Mr. Moulson said. “It kind of feels like they were trying to buy our vote. It’s as simple as that. I would feel the same way if it was Simmons offering the money.”

May I be the first to say "Bravo!" to the Preston RTC. I'm impressed.

The Rob Simmons campaign is understandable pissed about McMahon's lavish attempt to buy RTC support, and claimed that she had virtually no involvement in Republican Party politics until now.

So yeah, in a way it IS a "green" campaign. She's recycling the millions in tax dollars her mega-corporation has siphoned away from the state by pouring some of it back into local RTCs. Yes, she's doing her part.
Posted by CT Bob at 12/31/2009 12:27:00 PM