How we can keep Connecticut blue

Well, now that it's 2010 the Democrats in Connecticut will have their hands full keeping our Congressional delegation "blue". The anti-Obama hate machine has been working full time to poison the political atmosphere ever since the Presidential inauguration. Conservative media-sponsored "tea parties" have tapped into the deepest fears and latent racism inherent in some from the radical right wing.

These smear factors, aimed at low-information voters who don't have the time or inclination to examine the issues closely, are having a definite negative effect on elections. Last November, many outstanding local Democratic legislators were swept out of office due in part to this non-stop hateful rhetoric being spewed by conservative media. People are worried, and the conservatives are capitalizing on those fears, without offering any workable solutions.

The best way to counter this corporate-sponsored assault on the Democrats is to start at the local level, by participating in your local Democratic Town Committee. Every town in Connecticut has a DTC which is comprised of citizens who are registered Democrats and who put their name in to be elected onto the committee. Most towns have vacancies on the set number of DTC member slots, so contact your local DTC Chairman to join.

But you have to act NOW, because January is the month when most towns elect their members. You can click on this link at Democratic State Central and click on the drop down menu to select your town. Below the list of state legislators are the names and phone numbers of your town chair and the members of your DTC. Find out if they need any members, and if they do, the vote to elect you is basically a formality. 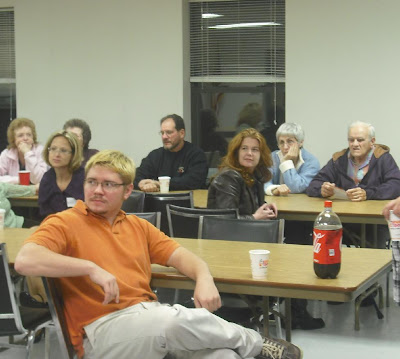 (Local DTC members at a meeting in Milford's 3rd District)
The great thing about belonging to your DTC is not only finding ways to help the party elect the best people to represent your town and state, but also it's a great way to meet and get to know your neighbors in town. Since joining my DTC two years ago, I've met dozens of terrific people that I now consider friends.

A democracy only works when the citizens get involved. This is an opportunity for you to make a difference in your town, your state, and your country. Isn't that worth a little bit of your time?
Posted by CT Bob at 1/02/2010 12:20:00 PM

Look at the mess the states in.

Do you think you can sell the voters some story about how those nasty Republicans with 37 out of 151 in the House & 12 out of 36 in the Senate created this?

Good luck with that.

The story is an obstructing Republican governor who doesn't know a thing about governoring a state. That'll change this year when a Democrat takes over.

(...well, didja expect anything different from me ACR?)

I'm sorry - I must have missed the part where someone explains why the heck it is worth wasting time trying to "change" a Democratic Party that has consistently repudiated progressive values at every level of government and for many, many years.

Any hope for a people-first government certainly lies outside of the "Tweedle-dee and Tweedle-dumb" parties, as Helen Keller so accurately labeled them.

Jesus James, I read your exact same comment over at My Left Nutmeg. I didn't bother to explain that while the Democrats indeed have problems, they're still infinitely better than what the Republicans did to us all the years they were in power.

Sorry, CT Bob. I only have so many ideas... sometimes I repeat them.

Are there alternatives to endless "least-worst" voting?

There's the third party route, which should become easier once Connecticut’s campaign finance law is made constitutional.

How about a new progressive third party for CT?

You could start by joining together the two distinct (and successful) large grass-roots networks that made possible civil unions and the SustiNet health care plan.

Then add in the environmental membership organizations (and others!) who are very concerned about global warming and the future of our planet and all that's NOT being done about it.

Then tap into the growing number of state residents who, polls tell us, are becoming more disillusioned every day with the ongoing, expensive, deadly Afghanistan/Iraq/(Yemen?)/(Iran?) wars.

Finally, reach out to all our college students who are beginning to realize that, nowadays, there IS no guaranteed ticket into the state’s rapidly-shrinking middles class.

>>....once Connecticut’s campaign finance law is made constitutional.

I wouldn't get too optimistic regarding the chances of that.

Well James, I do understand your point about wanting to create a viable third party, but I'm not quite willing to hand over control of Congress to the Republicans while waiting for it to happen.

Besides, and I hope you'll forgive my generalizing, I find most third party candidates to be kind of nutty. Ross Perot was the last independent who had a decent showing in a presidential election, garnering close to 20% of the vote in '96, and he was a bit of a goofball.

Though I'd take an independent Bernie Sanders...

Or Dennis Kucinich, if he left the DemoParty...

A master of the understatement.

The man was a loon!

Yeah, but I was trying to be nice!

Why can't people dislike Obama without it being hate? Why is it always hate?

I disagree with many of Obama's policies but I love him as a guy and respect him as my president.

Ralph, if only more people would express their point of view like you did, we probably wouldn't see so much obvious hatred directed towards the President.

For some reason, Fox News and conservative pundits have given a pass to the extreme radical right to use whatever language they want, regardless of whether it's hateful or racist. There's simply nobody to tell them that they shouldn't go over the line.

>>For some reason, Fox News

You obviously watch Fox when someone sends you a link to something, and not much else, as that's simply not true.

We noticed no one from your side had any problem with this less than objective CNN report.

She seemed perfectly reasonable to me. LOL!

OK, she was a bit rude. But she asked a question about how taxes affected him, and he responded with a dissertation about Lincoln. How's about he just answer the question? This ain't "Face The Nation", you know.

Plus, there was editing done to the Youtube piece, so who knows if the guy finally got to make a point? I'm skeptical. I'd have to see the whole report to make any judgment.

Let me tell you, for a CNN reporter to even show her mic flag in front of that crowd she deserves a frickin' medal.

Don't be blue Bob; cheer up!