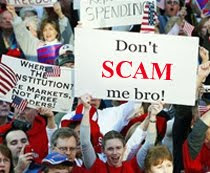 Tea party activists are scheduled to gather in Nashville early next month for what is billed as the "National Tea Party Convention".

However, controversy has steeped into the event, as many conservative observers are appalled at the extravagant cost to attend and the reported appearance fee of $100,000 for Sarah Palin. Critics say the people holding the event are profiteering off the passions of the supposed "grassroots" movement.

A ticket to the convention, including Ms. Palin's speech, will run you $549 (plus a $9.95 "fee") except that you can't get them because they're sold out. However, a $349 "banquet" ticket is still available, which will allow you in to hear Sarah's words of wisdom, after which you'll have to vacate the premises.

“I think it is a great con of people making money off the passions of others,” RedState’s Erick Erickson told the Washington Independent recently. A Nashville-based tea party activist called Phillips’ Tea Party Nation “dishonest” and that it is “hijacking the tea party movement.” And Politico reported last week that three major sponsors have withdrawn support because of “the convention’s unusual finances.”

“When I’ve talked to our members, they’ve said this is entirely too expensive,” said Jenny Beth Martin, the national coordinator of Tea Party Patriots. It “smells scammy,” Erickson said, adding, “A $500+ per person fee to a for-profit organization run by people most people have never heard of is neither populist nor accessible for many tea party activists.”

I don't know what everyone is complaining about. Isn't this what a "free market economy" is all about? Who are you to deny some good Americans of a way to cash in on the hopes of others?

Judging from the success of the ticket sales, I'd guess that the organizers are kicking themselves for not charging more for the tickets!

And we all know what that's called...

This is reminiscent of the second incarnation of the KKK, which was formed after World War I as a money-making proposition.

That crowd sold memberships, giving a portion back to full-time recruiting salesmen. Oddly enough, this iteration of the KKK was both the largest and most accepted: it elected governors in several state under its banner (though none in the South).

As a cautionary tale, the post-WWI KKK collapsed amid a series of scandals arising from financial "kanoodling" (Kansas City, MO and Portland, ME) by elected officials.