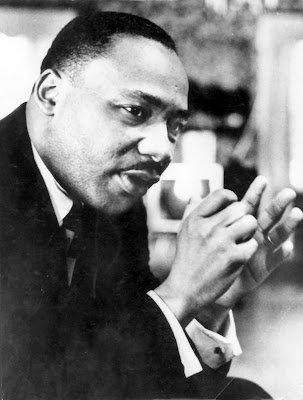 Thank you for honoring such a fine man as Martin Luther King, Jr.

Considering the fashion with which the late Civil Rights leader had been treated by the Democratic Party, I'm impressed!

Good for you Bob!

Jesus, give it a rest. There isn't a dead horse anywhere that ACR won't beat on occasion.

There's the study of history, and then there's living in the past. I can tell the difference.

>>There's the study of history, and then there's living in the past. I can tell the difference.

Hardly, but who can blame any Democrat for wishing to simply push their party's history under the rug? I'd certainly have some canned "ancient history...what've you done for me lately..?" retort as well were our positions reversed.


It's not as if a lot of Democrats died freeing slaves; in fact none did.
Nor did they stand up for Women's Suffrage or the Civil Rights Act.

One can argue all they like, but the numbers speak for themselves and facts are not opinions.


Maybe it's time for my party to regain it's senses and totally return to our roots; and likewise it's time for the Democratic Party to live much of it's history down.

I had the chance to hear Mike Steele speak a few months ago in Danbury where he pledged two things:

1. Bring the party back to it's roots in areas where local or state leadership have strayed.

2. No longer tolerate in silence, those that claim our historic battles and subsequent victories as their own.

But Ace, these southern Democrats you complain about became the base of the modern Republican party.
Strom Thurmond is one of the foremost of these and his career typifies the transformation that occurred in the south. Nixon played these guys like a virtuoso with his 'southern strategy'.
From the New Georgia Encyclopedia
Dixiecrats
From Encyclopedia of Alabama
Dixiecrats

You mean like Strom Thurmond the 1st member of the Senate to employ a Black as his Chief of Staff.....after Strom had become a Republican of course.

Ace, Strom was a segregationist. This is not the same as being a racist. In fact, Strom seems to have had a genuine affection for black people. When he was twenty-two, he fathered a child with his family's fifteen-year-old black maid. He never acknowledged his daughter, but the truth came out after his death.
oldswede