Vote in Massachusettes on Tuesday 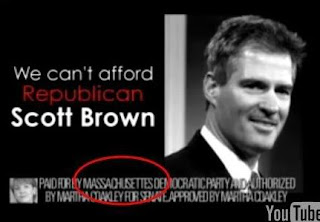 Get it? Apparently the only credible thing the GOP has against Martha Coakley is that the name of the state in an ad's disclaimer had an extra "E" in it. More than likely it was a low-level copy editor at the campaign's ad agency who made a spelling error. Ooooh, somebody alert the media!

Just because it's a minor thing isn't stopping the race for Ted Kennedy's Senate seat from being a real nail-biter. This is a close race that the Democrats can't afford to lose.

There are things you can do to help. If you live in Massachusetts, be sure to vote on Tuesday. If you live anywhere, go to MarthaCoakley.com and click on Get Involved and select "Call From Home" for instructions on how to make phone calls for Martha Coakley. You CAN do something to help ensure this senate seat remains in Democratic hands!
Posted by CT Bob at 1/16/2010 03:35:00 PM

Looks like there might be a 'significant winter weather event' in most of Massachusetts from Sunday through Monday. Lots of snow possible. Which candidate will benefit?
oldswede

Well, based on personal observations I know that old people hate going out in the snow. How do old people vote?

How do old people vote in Massachusetts special elections after snowstorms? Who knows.
But, polls seem to show that support for health care reform has a generational divide. Older people tend to like what they have and are leery of anything new, while younger people, not yet vested in the system, want a better deal, and are more likely to support the reform.
So, let it snow.
oldswede

I did help! I contributed 20 bucks to Scott via his website.

And I prayed -- multiple times. He has to win! This is a very very important election.

That's cool. I'm fine with you supporting the candidate you like, and I respect that.

I don't think we'll get the best senator no matter who wins, but I'm still hoping Coakley hangs on to win. The fact remains that no matter how this election turns out, the rest of 2010 is gonna be a kick-ass fun year of politics.

A lot of Democrats who think they are safe --aren't. Or so I like to think.

Is it true Don Williams is in trouble for his leadership post?

Every Democrat is somewhat in trouble these days, I think. We can't take anything for granted. We're seeing an enormous backlash against the Democrats, generally because that's what happens in election cycles.