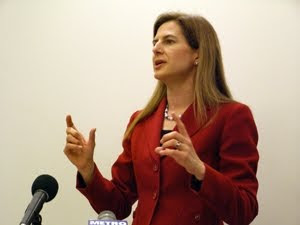 (Christine Stuart photo)
The Capitol is abuzz today with talk of Secretary of State Susan Bysiewicz changing course to run for the Attorney General's seat to be vacated by Dick Blumenthal.

Christine Stuart over at CT News Junkie has some breaking details, with more to come:

Rumors that Secretary of State Susan Bysiewicz would switch from her gubernatorial bid to the attorney general’s race have been swirling ever since Attorney General Richard Blumenthal announced he would run for U.S. Sen. Chris Dodd’s seat.

Bysiewicz’s campaign confirmed that she would officially make the switch 11 a.m., Wednesday at Middletown’s City Hall.

Wow sos gov now ag, whats she going to run for next week

Think I said that verbatim after the Arizona/Packers game

Does anybody know the details about her role legitimizing the sudden advent of the CFL party, or if she could have stood in the way of it instead? That left a bad taste in my mouth back then. If she was joe's enabler then, it doesn't bode well for the future.

You know, I've often mused publicly (usually on MLN) about if she held Joe's CFL Party to the absolute highest standards of verification, or if she simply rubber-stamped his make-believe party.

But then again, when I asked Ned's people about verifying signatures (especially after rumors circulated that a portion of Joe's signatures were collected on casino land, which would invalidate them) nobody seemed to give two shits. I've always maintained that there's nothing wrong with validating every single signature on each petition for Joe's Party of One.

But alas, deaf ears and such. We saw how bitching at Joe's slush fund didn't get us anywhere either. I guess the campaign didn't want to look like sour grape peddlers or something.

However, later on when Dr. John Orman successfully hijacked the CFL party, Bysiewicz ruled he had the ability to do so. And that's after Lieberman survived Lamont's challenge and she probably had more to lose. So, I'm kind of ambivalent about the whole thing. I guess I'll support her if she wins the nomination.

All RIGHT! Since I happen to have quite a bit of knowledge about this issue, and have explained this more than a few times, I'll try once AGAIN:

First of all, the CFL petitions had to be sent to the Elections Division of the SOTS Office, whose sole job was to certify the date/time of receipt, check for technical errors (non-notarized forms, missing certification signatures, etc.), and THEN send the petitions to the appropriate Town Clerk(s) for signature verification.

You see, her office does not have the signatures on computer; the online database only records basic facts.

Once the Clerks and Registrars have verified the signatures, the Secretary's office merely added up the number and verified whether that total exceeded the required number.

Also, any signature of a legitimate Connecticut voter obtained "on casino land" - or in New York, or in Vietnam, for that matter - is as valid as one obtained anywhere else.

In short, SOTS doesn't verify the signatures...your municipal officials do.

Interesting points, Bob. I had forgotten about the street money issue. The Lamont people should have played hardball on that, I think it would have made a difference, even if only to force the CT MSM to report on it. Far more powerful that that "hacked website" crap... I'll never forget how that dominated the headlines.

I'm ambivalent about Susan Bysiewicz too, perhaps she should be asked the kind of questions posed by you and anon with a camera rolling.

Bob, thanks for the info. I might dispute you on WHERE the signatures are gathered, however, because I think there is a rule about having to collect them in the district/state where the candidate is running. But I'm willing to let it slide.

My main concern is what if some or lots of the signatures had names listed like had been attributed to ACORN? Why isn't a photocopy of the names and signatures a part of the public record that's available for review? Isn't a petition a document that would qualify for FOI status?

LZ, believe me, we screamed bloody murder about the street money. The press had already decided it was a non-story because nobody who knew anything definite would talk. And I'd heard names of people who knew exactly what was going on, but they weren't willing to go OTR. The clock ran out on our efforts to persuade them to come clean.

After signature verification, the petitions are returned by the towns to the Secretary's Office...that office holds these documents (by state law) for 3 years (Gen. Stat. 9-412)

The only limitation on circulating a petition is that the circulator must be a registered elector in the race for which the petition is being circulated (Gen. Stat. 9-404b(d))

Well, that pretty much explains it. Thanks for the detail.

Figures it's only three years they have to hang onto them. Those signatures, real or fake, are likely in a landfill or shredded somewhere.