Right out of the gate 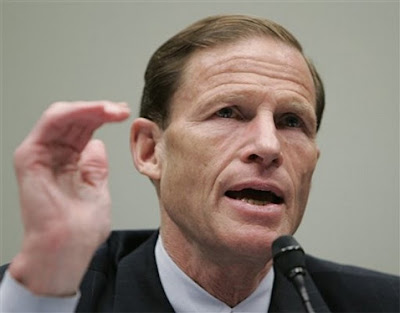 Attorney General Dick Blumenthal has hit the ground running in his bid to become Connecticut's next senator. The sudden news that Sen. Chris Dodd has decided to retire after a distinguished and illustrious career in the Senate has thrown the Republican field into an uproar.

The staff at CT News Junkie reports on a quick endorsement:

“We all know Dick Blumenthal’s record and it’s a great one,“ Leo Canty, Windsor’s Democratic Town Committee Chairman, said. “There was little discussion and a lot of enthusiasm for his candidacy as a US Senator so it didn’t take much to end up with a unanimous vote of the group, and we are delighted about the decision.”

The mysterious Scarce over at My Left Nutmeg discusses early polling, and boy-oh-boy, it sure don't look good for the Republicans:

When a Republican-leaning pollster like Scott Rasmussen can't find any good numbers to report you know that Rob Simmons and Linda McMahon have their work cut out.

Saramerica has similar bad news for the GOP over at CT Local Politics:

Finally, Rob Simmons is suffering his second metaphorical earthquake in the last several months, as written in the New London Day:

Twice in the past four months, the ground has shifted abruptly under the Stonington Republican who would be Connecticut's new junior senator, once with the entry of Linda McMahon into the party's primary race and again Wednesday, as the wounded Sen. Chris Dodd bowed out in favor of the popular Democratic Attorney General Richard Blumenthal.

For a guy whose campaign had just traded a buzzing, neon-lit target for a narrow, elusive one, Simmons sounded upbeat on Thursday.

"We worked up a Plan B and the Plan B was based on the fact that whoever is being chosen by the Democrat Party to run is going to have to confront a whole series of issues that have been contentious over the course of the last year," Simmons said. "In other words, you can change the face, but you don't necessarily change the race."

Simmons isn't alone in that optimism.

In an appearance Thursday on the "Today" show, McMahon, the former CEO of World Wrestling Entertainment, brushed aside questions about whether Blumenthal's entry into the race was bad news for her candidacy.

McMahon acknowledged that it would be "a tough race" given Blumenthal's popularity, but remained blasé about Dodd's sudden decision to withdraw. "It was not a big surprise," she said.

Both Simmons and McMahon's responses betray a hollow sort of optimism, what with their odds of winning plummeting spectacularly overnight. While nobody walks away with a Senate seat unless they're unopposed, the Attorney General is certainly in about as good a position as any Democrat can dream of going into the 2010 election.

It will be interesting to see how the Republican response to the entry of Dick Blumenthal into the race will play out, especially keeping in mind that there's still likely to be a bruising struggle for the GOP nomination.

I read comments in other blogs from the usual repub suspects about Dick Blumenthal not being tough enough for a real political campaign. I assume that means the usual smears and lies that the repubs do so well. Linda did hire her own hitman recently, so it's coming.
I'm sure that the repub hacks remember what happened to little Nancy Johnson when she went full-frontal negative on Chris Murphy. Ha ha ha.
Without the slime, what else does the GOPper mob have? Simmons is a proven loser; his big victory was over Sam Gejdenson, an incumbent who had mortally weakened himself. Rob then lost the next round. Where's the political experience? CIA dirty tricks, maybe. Linda is transparently trying to buy the seat. Her biggest strength is her groin kicks.
oldswede

Simmons has those funny ears and Elmer Fudd voice. Blumey looks like something from Madame Toussad's wax museum.

So is it going to be jughead, waxboy, nut kicker or alpo?

From a strictly superficial POV, it's interesting!

With Dodd's numbers being what they were, Simmons (and any one else with a brain) knew he was not going to be a candidate one way or another. As an incumbent its really bad news if a challenger gets within 10 points of you and Dodd was losing -- badly. Obama's policies are very unpopular. You can see from this far out from the election there is going to be some serious backlash against the Democrats.

Like I said on the Commie site, these numbers do not mean anything yet. Blumenthal has got a lot of work to do to catch up to Simmons command of the issues.

I would not trade places with you at all. The election isn't going to be held today. Its going to in Novmember and your guy has a lot of questions to answer between now and then. Is he up to it?

We on this side know we got a winner with Rob.

And on that point, just look at Simmons internet ad. That tells the whole tale. That’s why Rob is going to be our next senator.

Which one is the "Commie site"? There are so many of them I don't know which one you're referring to!

I wouldn't start breaking out the Moet just yet based on that video. Simmons has a wealth of horrendous sound bites that'll be utilized when the time is right (if ever needed; there's still a very wealthy gal from Greenwich with Simmons squarely in her sights). Dick only just entered the race, and answering a loaded question like "Would you have supported TARP?" doesn't have a correct answer any way you spin it.

Can't blame Simmons' people for trying to find something there, but Mr. 70% Plus doesn't HAVE a much of a "there" to find. Either they'll have to dig halfway to China looking for something, or they'll just start making shit up.

I can only guess which one they'll choose.

Well as a great man once famously said, bring it on!