This is creepily similar to something that came up during the 2006 Senate battle here in Connecticut.

In 2005 Scott Brown, as a Massachusetts state senator, co-sponsored a bill that would have exempted hospital personnel, on religious grounds, to inform victims of the availability of the "morning after pill", otherwise known as emergency contraception or "Plan B".

Anyone remember Joe Lieberman's stance on Plan B?

Well, there's no doubt that the Massachusetts Democratic Party played hardball with this mailer that went out over the weekend: 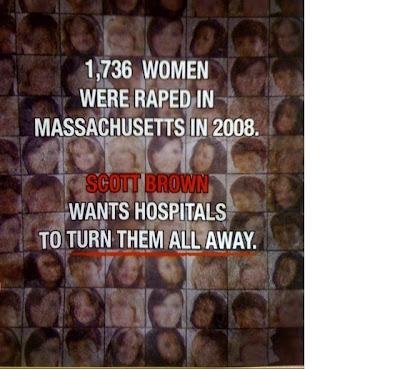 And "Short-ride Brown's" campaign responded to the mailer, calling it “negative,” “flailing,” and “malicious.”

They are filing a lawsuit on Tuesday if the party of trash fails to retract the FALSE statements.
Where do you get your news from? The kos kidz?

Wait, are you claiming that Scott Brown DIDN'T co-sponsor a bill that would restrict women's access to Plan B at hospitals? Is that what you're saying here?

Fact Bobby Facts:
Brown is a state senator, and in 2005 he filed an amendment that would have allowed workers at religious hospitals or with firmly held religious beliefs to avoid giving emergency contraception to rape victims. The amendment failed, and Brown voted in favor of a bill allowing the contraception. He also voted to override a veto issued by his fellow Republican, then-Gov. Mitt Romney.http://www.floppingaces.net/

Here's the video at Brown Campaign headquaters answering the FALSE Claims by an Attorney General no less. http://bluestatebluez.com/?p=37

Stand for something honorable for once Bob, really can you at least try?

"...in 2005 he filed an amendment that would have allowed workers at religious hospitals or with firmly held religious beliefs to avoid giving emergency contraception to rape victims."

How do you simply excuse that statement as if it's perfectly fine and acceptable? His amendment was defeated after he was basically lambasted for it, from both sides.

I simply don't understand how you neocons casually forgive religious zealots for taking away the legal rights of rape victims. What do you guys have against women, anyway?

Just because the amendment would have protected religious workers from administering something against their belief does not mean that 1) they could be notified by other cares and 2) administered by other carers. You're really bending things here, Bob.

Justin, how is it bending things when Brown says things that show he's a "short ride" proponent?

Look at the video in the link JTHM provided. The guy even uses the phrase "victims can be transported" to where they can get treatment!

Wouldn't you consider it a violation of your rights if a doctor told you that you had to go to another hospital for treatment because his religion prevents him from giving you blood while you're hemorrhaging all over the ER floor?

Absolutely. How would like to be forced give money to the RNC, same thing. Nobody, I mean nobody should forced to anything against their will.

This flyer reminds me of the Gejdenson attack ad that claimed Simmons sponsored a bill to poison schoolchildren.

"Scott Brown DIDN'T co-sponsor a bill that would restrict women's access to Plan B at hospitals? Is that what you're saying here?"

That is an absolutely true statement.

The mailer is a lie and quite a desperate one at that.

What's more the state has a lot of Catholics who in fact consider the so called Plan B pill to be a chemical abortion. I am pro-life myself but I don't agree thats what it is. But then again, I am not a practicing Catholic!

It was a good amendment that should have passed. Oh note the boy voted for the bill on final passage. Democrats are all about diversity right? Well why not give a little consideration to practicing Catholics on this one? They should be allowed to be Catholics, shouldn't they?

Its not as if ---as the flyer claims --- that the rape victims (hundreds and hundreds of them!) will be thrown out of the hospital. It just means a non practicing Catholic will give the women the pill.

They were talking about this on Fox News Sunday. The truth is out. Its going to backfire on her.

I think Scott Brown is going to win by a lead larger than expected. Every time she opens her mouth she screws up. I watched her speech at the Obama thing and it was not very good.

I even felt a little sorry for her.

You might be right about the outcome, MC. Coakley hasn't run the smartest campaign, nor is she probably the best Democratic candidate that could be running.

But unless a Democrat is truly repugnant, and anyone who's followed this blog knows that I haven't pulled any punches with them, I can't help but support a Democrat over a Republican for a national office.

Because, even when a candidate claims to have the purest of intentions, they'll often bend to the will of the party. There was no stronger example of this when John McCain, who was tortured as a POW and repeatedly voted against torture, decided that winning the GOP nomination in 2008 was more important than this most deeply held belief, and he came around to vote for Bush's policy of torture.

So I'm willing to bet that Martha Coakley will be more likely to vote in line with the Democratic agenda than Mr. "Short-Ride" of the GOP. I don't need to love every candidate I support!

This whole debate just made me crack up. Everyone's got their mind made up - all this back and forth does nothing.

True, but it IS kind of fun!

Coakley hasn't run the smartest campaign, nor is she probably the best Democratic candidate that could be running.

If a republican, and a fairly conservative one at that, can win in the people's socialist republic of Mass - "Ted Kennedy's seat" for crying out loud, then democrats better not start believing the "Caokley just ran a bad campaign" spin (and "spin" would be the understatement of the decade.) Democrats are in deep, deep trouble and they better face the facts as to why.

It is fun and none of us can even vote for our man or woman.

Good nite. But it is fun.