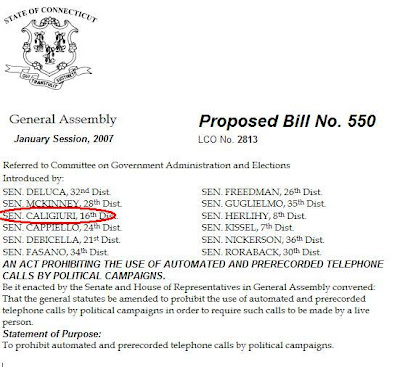 Daniela Altimari over on the Courant's Capitol Watch pointed out that State Sen. Sam Caligiuri (R-16), who announced his challenge to Rep. Chris Murphy's 5th Congressional District seat, seems to be a bit of a hypocrite for breaking the law that he sponsored restricting the use of robotic telephone calls by campaigns.

True, it never actually became a law (it died in committee) but it does look a bit weird when somebody rails against a practice, and then turns around and utilizes it for his own purposes. I'm just sayin'.

Listen to the Courant's audio of the robo-call.

UPDATE: One positive thing about this situation is I now know how to pronounce his name. On the audio, he calls himself "cal-eh-jury", not "cal-eh-Gury". Thank you Mr. Robo-call! 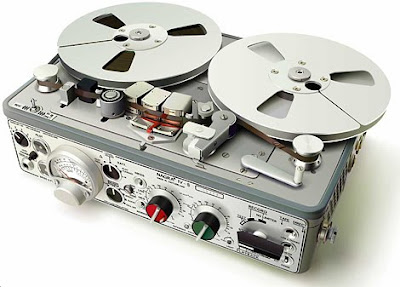 Nice vintage Nagra portable deck. My dad was a surgical filmmaker shooting a 16mm Eclair and I worked as the sound man running one of those way back in the day. Brings back fond memories.

Sorry it this is OT.

Yeah, sometimes I miss those remnants of the analog world. Computers came along and ruined everything! ;)

There is no penalty for breaking a proposed law.

If its legal and thinks it will help his campaign, why shouldn't he use it?

If I run for state senate, I will use the public financing even though I am against the whole idea because its there.

And my Dad had one of those too. I sold it at a flea market. I now wish I didn't.

I tend to agree, but it's just the silliness of Sam trying to DENY that it was a robo-call is the weird thing.

If he just said "yeah, I robo-called the living SHIT outta people...it's still legal, dude!", then this wouldn't be a story. His refusal to take ownership of his perfectly legitimate actions speaks volumes about his character.

Hypocrisy, regardless of whose, is the most perverse form of prevarication.

Hypocrisy is a clear cut True or False issue.

It's legal to buy a non-union car too.
However it's hypocrisy when an office holder receiving union support buys one, as Chris Murphy did as a state legislator.

How then can Caligiuri claim any sort of moral high ground when in fact none exists?

Thanks for getting the message out Bob!
People need to know what kind of people the Republicans have out there.

What cars are not built by unions? Can't be American, can they?

They must be a lot cheaper.