This is one of my infrequent book reviews. I tend to review not just the book, but the entire phenomenon upon which the book is based. Here's a great example of my multimedia approach to reviews, which I may start doing more frequently if I find the time.

I also do "10-Second Movie Reviews" on my film blog, but that's fairly infrequent too. 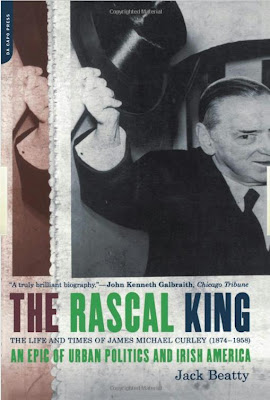 CT Joyce & I have a habit of scouring second-hand bookstores and used book sales for bargains. We make it a point of pride to rarely pay more than $1 for a hard cover and 50 cents for a paperback.

Which is how I came across "The Rascal King", Jack Beatty's epic biography of James Michael Curley, the famous (and infamous) politician from Boston.

Curley was an American original; a son of immigrant parents, who rose to become four-time mayor of Boston, Governor of Massachusetts, and a four-term Congressman. During his political career, which roughly spanned the first half of the 20th century, Curley was at times the most corrupt official Massachusetts had ever known, and the most well-loved by his constituents.

Often these occurred at the same time. 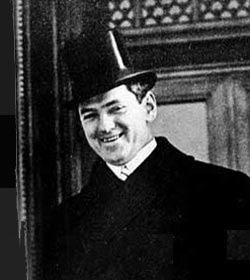 Beatty's book explores Curley's life in great detail. He takes you from Curley's formative years, through his early political career, and ultimately beyond the time of his greatest notoriety. Twice convicted, Curley spent five months of his fourth mayoral term in Danbury Prison.

While it would have been fairly easy to portray Curley as a somewhat sympathetic figure because of many personal tragedies, Beatty doesn't let you forget that the man was corrupt to his very core. You can only feel sadness for this man, of whom it is widely said he could have been President, if he'd only been honest!

But he was also a man who lived a huge life, and he lived it on his own terms.

Curley was the inspiration for the protagonist Frank Skeffington in the novel "The Last Hurrah" by Edwin O'Connor. When asked his favorite part of the book, Curley responded "The part where I die."

Spencer Tracy played Frank Skeffington in the movie, which I just located and will watch shortly.

And about ten years ago, the song "The Rascal King" by The Mighty Mighty Bosstones (video below) introduced Curley's checkered legacy to a new generation.

"Well in the end they knew his name!"

I loved this book. Read it about a dozen years ago. You're right: Beatty plays it straight. Every time it snows, I think of the image of Curley handing out those "snow buttons" to people who needed a job.

If you want another good read, try The Empire Statesman, which is about Al Smith. Really good read about another political figure who is sadly forgotten, but who made his mark.

Thanks for the recommendation, Brian. I'll add it to my list of books to browse for when I'm at the book sales.