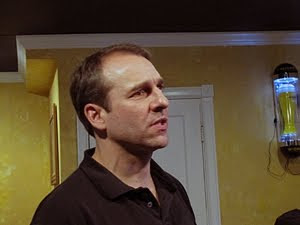 (Christine Stuart photo)
John Mertens, the erstwhile standard bearer of the Connecticut For Lieberman party, has named himself (with the help of a few friends) the nominee for Senate in the 2010 race.

By doing this he'll be directly opposing Richard Blumenthal in the general election, as the CFL party has maintained a ballot line through the terrific work spearheaded by Dr. John Orman, the late and very much missed former chair of the party.

For those of you not too familiar with the CFL party, here's a recap:

Back in 2006 when Joe Lieberman was challenged by his own party for the nomination, he hedged his bet by collecting signatures to qualify as an independent candidate in the event he lost the primary to Ned Lamont. Local statutes require a name for the ersatz party, so Lieberman chose a suitably ego-drive name: "Connecticut For Lieberman".

Lieberman never actually became a member of his own party, and after he won reelection, he figured the party would simply die a natural death.

So that left the party open to anyone who wished to take it over. Dr. John Orman, a political science professor at Fairfield University, had run against Lieberman previously and he saw an opportunity to grab the party and use it to both embarrass Lieberman and prevent him from using it in 2012 if he wanted to run again.

John Orman possessed a great sense of humor, and he created an atmosphere of fun within the party. He also intended the party to remain viable in 2012, so it needed to gain at least 1% of the vote if endorsing a candidate.

Eventually Dr. Orman turned over the reins of the party to John Mertens, with the implicit understanding that it would be used as Orman intended. Mertens, a failed independent candidate who couldn't manage to gather enough signatures to gain ballot access in his own quest for Lieberman's senate seat in 2006, likely nursed an aching desire to occupy the stage with a guaranteed ballot line. The CFL party provided a way for him to do so.

So Mertens took the party, disregarding Dr. Orman's wishes, and turned it into a vehicle to give his ego a nice ride. He intended to use it to challenge Chris Dodd for his seat, rather than Joe Lieberman. And now he wants to try to beat out Richard Blumenthal.

The fact that if Mertens fails to gain 1% of the vote in the general election, the party loses the ballot line and it becomes essentially moribund. And he's challenging a real Democrat; not a Republican in donkey's clothing like Lieberman.

Listen, I think it's great to have an ego and you can be as obnoxious as you want to be, but you shouldn't do it at other people's expense. Believe me, I'm a blogger with a somewhat inflated ego (shut up!) but I wouldn't try to take over another blog like say CTLP simply for self-aggrandizement and self-promotion. This is the same thing. Only worse.

It just makes me sick that someone John Orman entrusted with his pet project has decided to shamelessly exploit it solely for his own gain. This makes me miss Dr. Orman all that much more.

John Orman supported my run for U.S. Senate in 2010. You can read the details here:
http://www.myleftnutmeg.com/diary/12058/a-response-to-a-letter-to-john-mertens/

I ask everyone to go to my website and read my 30 detailed position statements and solutions to long term problems, and form your own opinion about me and my candidacy:
http://mertens2010.blogspot.com/

And, if you read Christine Stuart's article all the way through, you will see that I am committed to doing whatever it takes to keep the CFL ballot line for 2012.

Small clarification that matters to me....

"Dr." Mertens is not a Doctor in the mode of Dr. Howard Dean.

Don't patronize me, John. I read Christine's article. You said that if you didn't think you'd get the 1%, you'll supposedly endorse Blumenthal.

That means exactly bullshit, Doc! What's your yardstick for measuring whether you'll get that 1%? They're not even going to poll anyone about you. The only way you'll be proven wrong in your mind is to finish your doomed campaign, and you'll end up pulling about .02% or so, depending on how many friends you have.

I have no patience for back-stabbers. We already got one Joe Lieberman, which is more than enough. Get real, or get lost.

Charter Oak Health Plan???? What a joke. That was a cynically contrived BS plan offered by Rell to undermine Healthcare4everyone. Any progressive would have said that it needed to be destroyed, not reinforced.

I knew John Orman, and you sir are no John Orman.

Could one come up with a more bizarre campaign strategy? Something like Lieberman will run on the "Connecticut for John Mertens" party line.

The CFL party is a joke and now is John Mertens.

Hey, that's a great idea! We should start gathering signatures for the "Connecticut for Mertens" Party!

Ah, not really. You can take a joke too far, and the guy is already a joke in my opinion.