The reclusive and somewhat troubled author of "Catcher in the Rye" died in his home Wednesday. I have a personal story about the famous book:

I had read it many years ago as part of our assigned reading in high school, and while it certainly may have slightly reinforced my already developing sense of defiance (Hunter S. Thompson was a much greater influence) it didn't affect me anywhere near as much as some of the book's more obsessed fans.

Which is why, just one year ago, I took this photo of the guy sitting in front of me at President Obama's inauguration parade. For someone to wait in the freezing cold for hours while clutching a well-worn copy of the nonconformist novel kind of set off an alarm in my head. 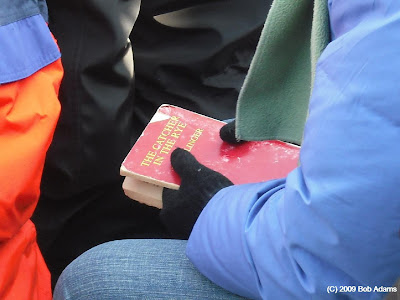 So I watched the guy like a hawk when the president approached, partly because if he did anything threatening, I'd have a chance to be the hero by maybe tackling him and safely subduing him.

Well, that's how it played out in my mind, anyway.

But mostly, because I knew if he drew a gun, I'm sure I (and CT Joyce, and everyone else standing within 20 feet of him) would have been instantly cut down by the withering cross-fire from the massive and well-armed military presence along the parade route and the numerous snipers atop the buildings. Those guys were determined not to fuck up and lose the President on the very first day!

I'm sure they were already jumpy enough because Obama decided to walk the entire parade route rather than ride in his armored limousine. And then to have some anarchist psychopath suddenly leap up and wave a weapon at the wrong moment could have made it a very bad day for everyone involved!

Fortunately, the guy was merely weird and not dangerous, so we were able to shiver in the frigid cold and enjoy the festivities in peace.

What also seems strange about that picture is that the book appears to be "left-handed"; i.e., it opens backwards.

Actually, the binding was split. Probably because he read and re-read the book obsessively, over and over, like a crazy person.

But that's just a guess.

Howard Zinn has recently departed us too.

His take on civil disobediance:

Too bad your memories of JD Salinger hinge on crazy asshole assassin of Lennon. I was an early fan of Salinger from the "9 Stories" collection (which includes the seminal Glass Family story "A Perfect Day for Bananafish" as well as the winner for best title for a short story: "For Esme, With Love and Squalor"), and onward to "Raise High The Roofbeams, Carpenters" and "Franny & Zooey".

I love Catcher but there is so much more to the Salinger output.

I can't wait for the book he had in the vault to be printed!

Yeah, I'll have to get around to some of his short stories now.

And it's not just Chapman who was crazily obsessed with "Catcher"...John Hinckley also had a well-worn copy in his belongings. And so did Mel Gibson in "Conspiracy Theory", a mediocre film from the 90's.

It's almost a cliche now; if you read the book more than once, you're likely a dangerous loon!

And there's a very nice bio of Howard Zinn on FireDogLake.