Schiff wants us to invest in China

In his speech in front of maybe 50 or 60 people at a Tea Party in New Haven on Saturday, Republican candidate for Senate Peter Schiff began his remarks by saying that the health care crisis in America was created by the government.

It's easy for a millionaire like Schiff to rail against government participation in regulating health care, because he can afford to provide his family with the very best care money can buy. But for the majority of middle class families who are struggling to pay for the ever increasing premiums and reductions of coverage that the unregulated insurance companies get away with, it's just not that easy.

And if you listen to his speech, he then goes on to list dozens of ways the government should become involved in regulating insurance companies.

Mr. "Free Market Economy" is all for investing in offshore opportunities. He stated that we should be willing to buy our insurance from Japanese or Swiss insurance companies. He also said that he invests heavily in Communist China, and Americans should do the same.

Schiff then responded to a questioner in the crowd when asked how much money he had invested in America with "Very little!" He later finished his retort with "I pay a lot more taxes in Connecticut than you do," which, while presuming that he's always the richest guy in the room, seems to imply that only those who are wealthy enough may express an opinion. 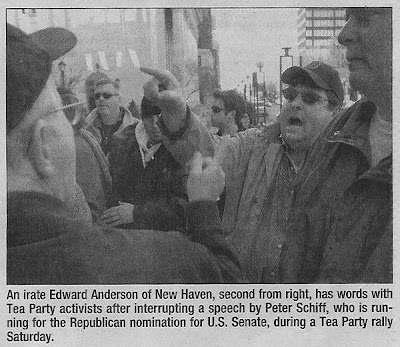 (New Haven Register photo, link to their story here)
Hmmm...interesting caption. Why is the one dissenter in the crowd called "irate", while the extremists hysterically railing against the government are known here as "activists"? A person in the crowd responded to the "irate" heckler with "Go back to Ireland!" which seems to underscore the intolerant tendencies of the tea party throng. What kind of activists are those?
Posted by CT Bob at 1/17/2010 10:00:00 AM

Ed is soooo much cuter than that photo implies.

Gee that post was long on class envy and short on reasons why the government (which can't manage a parking lot at ECSU right) should be in charge of my healthcare.

I just found out today that some of my Partners medical tests were not covered by his plan. We owe a LOT OF MONEY. I don't blame anyone but the lawyers.

We need tort reform. I hear it worked splendidly in Texas. Lets try it on the national level.

I will tell you another thing. I had no insurance and I got pneumonia. I was treated. I got my pills. I did not get better right away as is normal and I had to keep going back. X-Ray after X-Ray and cat scans and all kinds of other tests.

Then an X-Ray tech found the problem. I had a foreign object in my lung! They went used a fancy-smancy probe to go up my nose and down my throat and grab the chicken bone fragment that was causing the infection in my lung. (they even took pictures of it while it was still in there). They were so gentle that when I woke up I didn't believe they did anything yet.

I didn't spend three seconds in the doctors office talking about money. They did bill me and I sent them in money a little at a time for years but I paid it off finally a few years ago. I still got the same doctors. They even gave me free sample pills.

I can't tell you how thankful I was they treated me and made me better. I really thought I was going to die. Its very scary not being able to breath.

I was told by someone at the hospital that I could literally give them a dollar a month and my bill would never go to a collection agency. I wish I had known that earlier.

We got the best healthcare system on the planet. Lets not screw that up.

As for your cancer scenario, it is ObamaCare that we have to worry about. They have rationing in other socialized countries. We would have that here to if we let them. Palin was absolutely right about the Death Panels.

And where is all the money going to come from to pay for all this?

Healthcare is a tangled knot of an issue that I do not pretend to fully understand but I do want to continue with at least a somewhat market-based approach.

I hope that plan fails. It is no good for anyone least of all the Democrats. Your party will fair a lot better in the midterms if you allow this monstrosity to die.

If you need proof that killing this bill is in your best interests than look to Mass.

If Democrats can't win there, they can't win anywhere.

McCommas, this is a puzzling post.
What hospitals are you talking about? Some clarification would help.
Also, if you do some of your own research instead of just regurgitating Fox crap, you would know that since the tort reform in Texas, the state has the highest rate of uninsured in the country AND the insurance companies still keep jacking the rates. This is good for the big companies but very bad for Americans.
And, anonymous #1, what planet are you on?
oldswede

Incidentally, Texas now has some of the highest medical costs in the nation.

McCommas, your reasoning is faulty. Your argument is similar to saying that government specifications on levees caused the New Orleans disaster.

In fact, the health care crisis - like the inadequate levees that failed - are a direct result of insufficient government oversight and regulation.

No sense arguing with statist Socialists. I just want to know what the hell they intend to do when they make everyone poor and dependent on government and there isn't anyone left to tax!!

There ARE free market solutions to healthcare - but Progressive Statist robots would have none of that. They are just as happy to regurgitate the crap they hear from MSNBC and HuffPo and protect their government giveaway programs and blame rich people for their problems.

Their argument is built all around class envy and bitterness that they haven't made much of their own life. They are just as happy to take from those who truly produce and provide jobs. Just ask these Progressive idealogues where they would be if some "greedy capitalists" hadn't started the company that they work for (or fund the government agency that they work for through taxation).

And instead of having a constructive discussion on issues theses statists have nothing better to do then hurl insults and ideological BS. What a sorry lot.

“The moment we want to believe something, we suddenly see all the arguments for it, and become blind to the arguments against it.”
- G. B. Shaw

We need healthcare reform. The private insurers had their chance to do things right, but chose obscene profits with the attendant human misery over good profit with people actually getting good insurance and care.

While the Democratic plans are far from perfect, at least they can be built upon. Sadly the Republicans continue to agitate for a system that is pretty much status quo.

One thing about Peter Schiff and his viewpoint, his father Irwin is the leading proponent of the "you don't have to pay federal taxes" idiocy and is serving a federal sentence in Indiana. Like father like son?

"Atlas Shrugged"? Former Federal Reserve chief Alan Greenspan was a big fan and a personal friend of Alisa Zinovyevna Rosenbaum, aka Ayn Rand, a Russian emigre. His tenure at the Fed was characterized by a hands-off policy, in keeping with Randian theory. He did nothing to slow or discourage the banks or Wall Street from creating several financial bubbles that burst disastrously. The most recent was the mortgage crisis, which led to the big hole we are now in.
When hauled before the House Oversight and Government Reform Committee, in October, 2008, he waffled and weaseled as usual. Nothing was his fault. He was a career bureaucrat, after all. But he did make the jaw-dropping admission that Randian theory does not hold up, "I made a mistake in presuming that the self-interests of organizations, specifically banks and others, were such as that they were best capable of protecting their own shareholders and their equity in the firms."
Much more can be found with any quick search online. Here are some citations to start with:
Regulators say they made fateful mistakes
Greenspan Concedes Error on Regulation
So, you don't have to look very far or very deep to see what happens when Randians get power.
oldswede

There is no healthcare crisis.

What we got works a lot better than what ObamaCare would do to us.

This Scott Brown guy has just got to win.

If he kills your ObamaCare, he just might save your majority in congress.

"There is no healthcare crisis."

Whew! That's a relief! I was worried there for a minute!

i'm not voting for someone who doesn't invest in america.

“The formula of the argument is simple and familiar: to dispose of a problem all that is necessary is to deny that it exists” - H. L. Mencken

Arguing with an idiot is the surest way to prove you are one." - West Haven Bob

In fact, I'm so pro-America that I've NEVER owned a foreign car. Not one, not never. I'm very proud of that fact. I know I'll never own anything but American.

How many Republicans can claim that?

health insurance used to mean a group of people get together and agree to donate a small amount of money every month to a pool. if one of the donators gets into an unexpected car accident or has an unexpected heart attack they can access part of that pool of money to pay for the catastrophic health care costs. would it be fair if i never donated to this pool then, after i get a heart attack, i want to immediately join the pool so i can immediately get all the money? no.

but thats what you want when you call for forcing insurance companies to take customers with pre existing conditions. insurance and charity are two different things. what your talking about is charity. if you want to give to charity, go ahead. if you want to organize a charity like unicef to help large numbers of people who didnt think ahead and didnt get insurance, go ahead. but for you to go to a corrupt politician and bribe him or her so you can get him to enact a law to steal peoples money for your charity thats not charity, thats theft.

when the health care industry was relatively unregulated pre 1960, prices were relatively low and everyone could afford it. now we have a health care crises. why? what is the difference? before government, no crisis, after government, big crisis. you be the judge.

the free market is the most efficient allocator of resources ever invented. it rewards businesses, via profits, for giving as many people as possible what they want at the lowest price. government does the opposite, it makes a product or service very high priced and only available to the rich or the politically connected. can you say aarp?