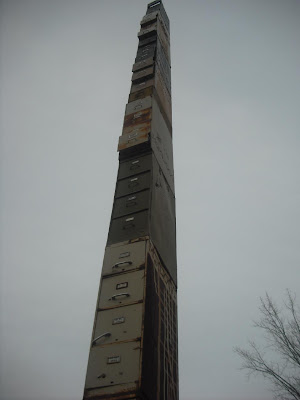 Roadside attractions have been a part of America's landscape ever since automobiles became popular and affordable. And the very best roadside attractions, in my opinion, are those that you come upon unexpectedly.

They're the best because you have absolutely no expectations, and therefore you can't be disappointed if the plaster dinosaur isn't as awesome as it looks in the postcards, or if the largest ball of twine is actually kind of ratty looking.

So yesterday I was up in Vermont at the end of a long day, and drove past this unique site. It's apparently the "World's Tallest File Cabinet", and it looks like it tops out somewhere around 40 feet tall. I pulled over, grabbed my camera, and shot a bit of video.

And I don't want to hear from any GOP wags out there claiming they built it to store the 2,000-page health care reform bill; the rust on the cabinet means it's obviously been around at least since the days of Bush/Cheney, and I'm sure there won't be any room left after storing all the terrible legislation that was passed during those eight long years!

Looks like a totem pole. What's on top and what's on the bottom? (Okay - don't shoot me. I lived in Alaska 3 years, Anchorage, not Wasilla.) Otherwise, it just kind of reminds me of " The Office" for some reason.

It definitely looks like something that could represent "The Office". I wonder if it was there when the show premiered? Burlington even looks a little like Scranton, especially on a gray day.