A game of chicken

Today I received an oversized envelope in the mail. When I ripped it open I found this little guy in there: 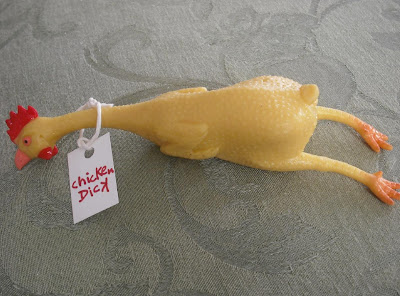 The first thing I thought of was, "Oh shit, who did I piss off NOW?!?" For a second I felt like Sonny Corleone opening that package to find the "Sicilian message" in it! Sure it wasn't a dead fish wrapped up in Luca Brasi's vest, but I wondered who'd send me something like that.

Then I saw a little card in the envelope, which said this:

I'm afraid to debate Merrick Alpert again because he really cooked my goose the first time. He is young and bold, and takes clear positions on issues like job creation, health care, clean government, and Afghanistan.

My positions aren't clear because I believe in incrementalism; in small steps that don't ruffle feathers. On the other hand, I do love to sue Connecticut businesses.

PS. Did I mention that my lawsuits create jobs?"

Ohhhhh! It's a little joke, a play on Dick Blumenthal's name and his supposed reticence about debating Merrick Alpert again!

Good, because at least I don't have to worry about getting all shot up at the toll booth on the causeway or anything. (yes, I'm a big fan of "The Godfather")

So I called Lev St. King, Alpert's communications director, and asked about the item. He replied that they were having a bit of fun at the Attorney General's expense, but they also wanted to make a strong point. I told him there was no doubt that the point was made.

A while later I got an email from the campaign, with Alpert's comment:

“I wanted to make sure that folks had a souvenir from the only Democratic Senate debate, since Mr. Blumenthal refuses to get back on stage and do it again."

Well, I'm sure this will succeed in bringing attention to the situation. I can imagine the local TV news having a bit of fun with it.

Alpert may be taking a risk with such a message, and I can see a potential for it to backfire on him. Some people will probably not get the joke, or feign righteous indignation. Regardless, it was a gutsy thing to do.

UPDATE: Christine Stuart over at CT News Junkie has another photo of the chicken, plus a response from the Blumenthal campaign:

“I’m sure he’s going to try anything he can to get his name in the newspaper, but if he wants to be taken seriously by Democrats and avoid the label of ‘fringe candidate,’ he may want to spend more time putting forward his own qualifications and platform and less time attacking his opponents,” Downes said.

In this week’s Quinnipiac University poll Blumenthal trampled Alpert in the Democratic primary 81 to 6 percent. The poll also found that 93 percent of the voters polled don’t know enough about Alpert to form an opinion.

Very well reported CTBob! Maura Downes comment is rather funny. If we look at Richard Blumenthal's website, we can clearly see that he is NOT all about substance http://richardblumenthal.com/?gclid=COGo2sPbxaACFRBM5QodYClRaw
Show me one spot in that website where we can find the substance of his campaign? Looking at Merrick Alpert's website, merrickforachange.com we can see Merrick's subtance out in the open. If that isn't proof for anyone, we can look at the debate, where Merrick provided nothing but substance and Mr. Blumenthal provided insight (or lack thereof) into his history of lawsuits and their job creation powers.

Merrick just put himself where he belongs which is on the same level as Lee Whitnum.

I can hardly wait for the Debate between those two

I have a vague recollection, Chicken George from 1992.

Regardless of of Mr. Alpert's other ideas, some good, some not so good, he is correct about blumenthal's penchant to hamstring CT business and job creation. While we need to keep an eye on company's conduct, creating a hostile business enviroment does not help job creation and retention. But the chicken stunt is lame, but perhaps 5th graders would find it funny especially since the word dick was prominent.