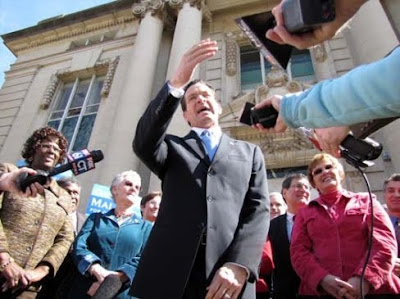 “Connecticut is still a great state, but the fact is we’ve fallen behind,” said Malloy. “Our problem isn’t that we can’t do better, it’s that we don’t demand better. I’m running for Governor because I’m tired of watching Hartford from the outside and seeing it mired in mediocrity. I want to lead the charge in demanding a better, more vibrant Connecticut.”

Continued Malloy, “Connecticut has become a place where being dead last in job growth doesn’t raise an eyebrow. Having the worst achievement gap in the country gets yawned at. Having more debt per capita than any state in the nation gets accepted as a way of life. Getting shut out of federal funding gets a shrug of the shoulders. Enough’s enough – it’s time to demand better.”

Ned Lamont commented today on Dan's announcement saying, "I welcome Dan to the race. Connecticut is facing significant challenges, and I look forward to a serious discussion of the best way to bring jobs back our towns and cities and get our state back on track."

I'm sure a lot of politics junkies in the state are looking forward to seeing these two candidates face off in a debate, which I'm hoping will occur well before the state convention in three months.
Posted by CT Bob at 3/10/2010 05:41:00 PM

Get rid of the minimum wage in Connecticut!

Business will stampede to our state.
Prices of everything will come down!

People will leave in droves because it would be impossible to afford to live here.

No it won't because everything will be cheaper.
It's simple economics.

For example, If farms can hire cheaper workers, food prices will come down.

There's really no such thing as "simple economics."

It's true that you can have a model of a simplified world that predicts a decrease in prices when the wage floor is removed, but using that model as the basis for policy change in the real world is (as oldswede so eloquently put it) totally ignorant and stupid.