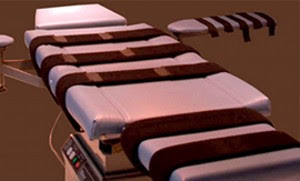 The Connecticut Mirror ran a story today saying that, after a visit from Dr. William Petit, State Senator Edith Prague went on the record saying she wanted to delay the repeal vote until next year.

Prague's rationale was that since the trial for the remaining defendant in the the Cheshire home invasion hasn't occurred yet, a repeal of the death penalty statute may have an impact on the sentencing, should the defendant be found guilty.

I understand the desire of Dr. Petit to see justice for his family, but the reality is that under Connecticut law, there simply WON'T be any executions of death row inmates unless they drop all appeals and go to the death chamber voluntarily. The ONLY person executed in this state in the last fifty years was Micheal Ross, a serial killer who did just that.

And even then, it STILL took ten years for the sentence to be carried out.

There is no doubt that many people feel intense empathy for the loss of the Petit family, but a civilized society shouldn't be in the business of killing people. Especially not when there have been so many abuses within the system, and the entire system itself is heavily weighed against people who don't have the resources to hire the best legal team to defend them.

Putting this off for a year is simply a politically "safe" move, in a state where a majority of people would love to see those killers get the ultimate punishment.

But that doesn't make it right.

Sen. Andrew Maynard, another Democratic senator, has jumped on the Petit bandwagon and said he'll also withhold his vote.

So it looks like this barbaric law will continue to be a stain on the law books in Connecticut. There goes another opportunity, at least for a while, to pass a real progressive bill.
Posted by CT Bob at 5/11/2011 07:00:00 PM